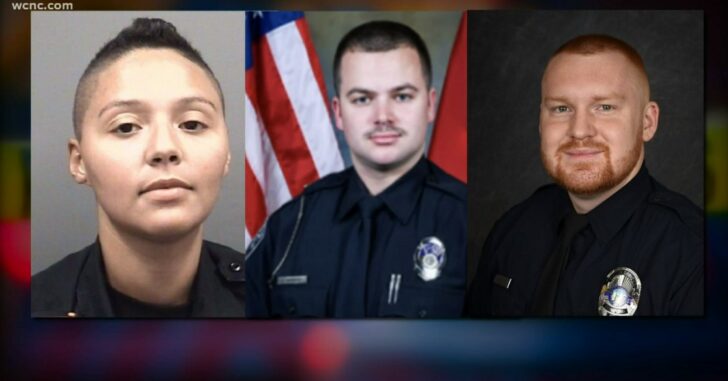 NORTH CAROLINA – Four police officers serving three cities in a 50-mile stretch of Interstate 85 near Charlotte have been shot in a 9-day period, and a deputy died from injuries sustained in a crash. The deaths of three officers in 5 days has deeply affected many communities.

Around 3:30 a.m. on December 11th, Mt. Holly Police responded to a breaking and entering in progress at the Mount Holly Carwash on Beatty Avenue. Arriving officers encountered an armed suspect and gunfire was exchanged. Officer Tyler Herndon, 25, was wounded and rushed to CaroMont Regional Medical Center. Officer Herndon died a short time later, 2 days before his 26th birthday.

2 days later, On December 13th, Rowan County Detention Officer Kara Mariah Alsup succumbed to injuries received on December 9th, when her vehicle was struck on her way home from an overnight shift while stopped on the shoulder of I-85 after another vehicle struck her in a hit-and-run..

3 days later, around 10:20 p.m. on December 16th, Concord Police were called to a car crash on Bruton Smith Boulevard near I-85. A North Carolina Alcohol Law Enforcement (ALE) officer was in the area and arrived on the scene to discover an abandoned vehicle. A CPD officer arrived, and a woman approached the two and described a man who had just attempted to carjack her, saying that the man was last seen running toward the Sonic restaurant. The information was shared via radio with other officers.

CPD Officers Jason Shuping and Kaleb Robinson, along with the ALE officer, located the suspect at the Sonic on Gateway Lane NW. As they approached, the man fired a handgun, striking both CPD officers. Two additional CPD officers arrived, found the suspect attempting to steal a vehicle, and engaged him in another firefight, fatally shooting him. Officer Shuping, 25, succumbed to his wounds, while Officer Robinson, 23, was treated for non-life-threatening injuries.

3 days later, around 8:00 p.m. on December 19th, Kings Mountain Police were called to a report of a suspicious person on the back porch of a home on Downing Drive.  The suspect fled toward the Kings Mountain Country Club, where 13-year KMPD veteran Corporal Frank Lee Whittington Jr. encountered him. Gunfire was exchanged with both men being wounded. Cpl. Whittington underwent surgery for undisclosed injuries and is expected to survive.

The North Carolina State Bureau of Investigation is conducting all three investigations.  Officer Herndon’s killer is charged with first-degree murder.  Officer Shuping’s killer was killed during the commission of his heinous acts. Cpl. Whittington’s attacker was hospitalized for undisclosed injuries and will be charged.

In a year that has been marred by anti-police rhetoric across the country, the support for these agencies, the officers involved, and their families has been tremendous. It has served to bring a great awakening to the general public that there is no such thing as a “routine call” for law enforcement officers, and the realization that any call could be their last.

Previous article: Two Men Injured in “Accidental” Shooting Inside Gun Store Next article: Gunman Shot In Self-Defense By One Of His Intended Victims