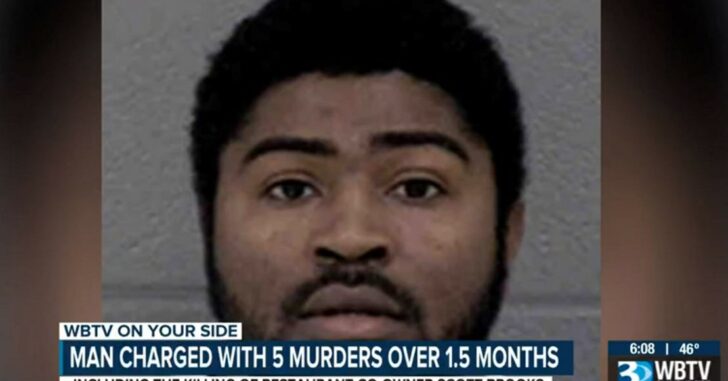 CHARLOTTE, NORTH CAROLINA – A man who was released from prison on June 6, 2019 is charged with committing 5 murders between December 9, 2019 and January 23, 2020. 31-year-old Steven Staples had a lengthy rap sheet prior to the most recent and most serious charges of his criminal career which began at age 16.

Between 2006-2008, he was charged with larceny 3 times, breaking or entering, possession of a stolen firearm, robbery with a dangerous weapon twice, and fleeing to elude arrest twice. In 2010, he was convicted and was imprisoned until his release on June 6, 2019.

6 months later, in the pre-dawn hours of December 9, 2019, Scott Brooks, 61, was murdered as he opened up Brooks Sandwich Shop, a beloved Charlotte landmark owned and operated by he and his twin brother and founded by his father the year that they were born.

2 weeks later, December 23rd, Anthony Leakes, 40, of Charlotte was found in his home by his girlfriend, dead of multiple gunshots.

2½ weeks later, January 11th, Siojvon Joseph and Asa Shannon, both 35 and both of Charlotte, were found shot to death inside a SUV on Atando Avenue.

Less than 2 weeks later, January 23rd, Andres Osbaldo Moscotte, 23, of Hickory was found dead outside his home by his girlfriend, and his 2006 Mercedes Benz ML350 was stolen.

2019 saw the highest murder rate in over a decade in Charlotte, with 107 homicides. As of November 8, 2020, there have already been 104 murders, on pace to exceed the record high of the previous year. With a population of 1.11 million, Mecklenburg County has over 100 murder cases awaiting a court date with only one courtroom in use due to COVID-19 restrictions.

One can only assume that the killing spree would have continued leaving even more victims, had Staples not been arrested in early February through the cooperation of law enforcement agencies.

Rising crime rates, the uncertainty of the COVID-19 pandemic, violent protests across the country and the possible change in the controlling political parties are all believed to be contributing factors to the increased desire for self-defense firearms.

Previous article: [VIDEO] Fundamentals of Firearms Ownership - Presented by Ruger Next article: This Attempted Murder Happens So Quickly, It's Amazing The Guy Survived