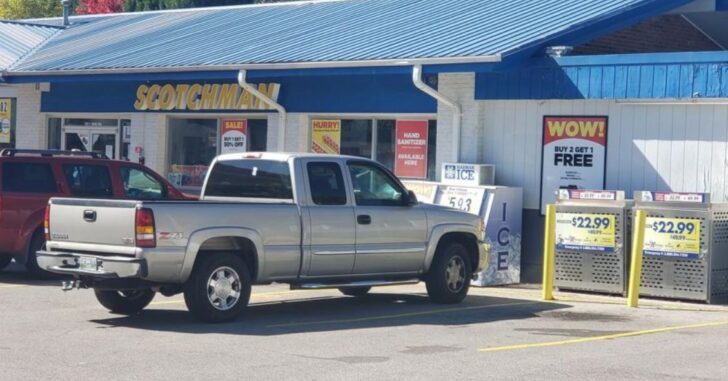 JOHNSON CITY, GEORGIA — ‘If at first you don’t succeed, try, try again!’ proved to be bad advice for an armed man on the evening of Tuesday, October 27th.

Police were called to Tri-City Wholesale Tobacco at 2518 South Roan Street for a reported armed robbery. Despite being armed and demanding money from the clerk, the suspect left empty-handed, but not before firing his pistol inside the store. Fortunately, no one was injured in the incident.

A short time later, at around 10:15 p.m., police responded to another reported armed robbery, this one at the Scotchman convenience store at 1101 East Unaka Avenue. Held at gunpoint, the female clerk was complying with the armed robber’s demands when her husband, a concealed handgun permit holder, intervened.  When the robber pointed his weapon at the man, the clerk’s husband responded by shooting the crook twice. Despite being wounded, he fled the business.

Witnesses provided a description of the Scotchman suspect, which matched the earlier description of the Tri-City suspect. A police K9 found the bad guy a short distance away, and the dog got credit for the collar on the call after the man refused to obey the officer’s commands to surrender. Once in custody, he was transported to a local hospital with two gunshot wounds and was listed in serious but stable condition.

The following day the man was identified as Dequan Lamar Rushing of Georgia. He was booked into the Washington County Detention Center on charges of robbery, assault, and kidnapping, and was given a $151,000 bond pending a Sessions Court Appearance on Thursday.

Perhaps he should have called it a night after his first failed attempt, instead of pushing his luck and running into someone who was prepared to deal with his kind.

Previous article: Why We Carry: Woman Uses Hammer to Attack Man Before Shooting Him Next article: Armed Robber Holding Pharmacist at Gunpoint Shot by Pharmacy Employee