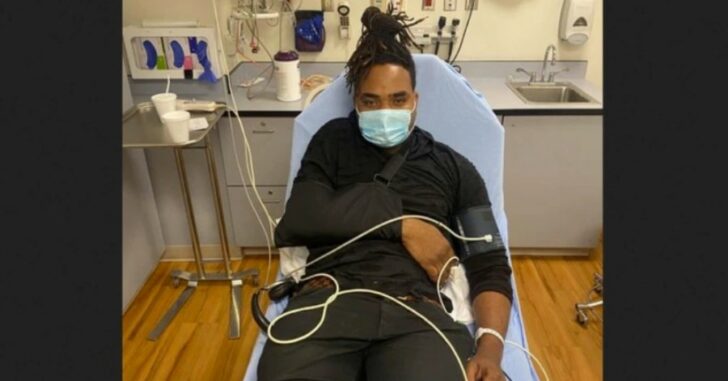 GREELEY, COLORADO — A homeowner who was assaulted in his home shot and wounded the intruder on Sunday night. Greeley resident Bobby Destine, who owns the home in the 1200 block of 6th Street, told police that he was out of options and resorted to his handgun as a last resort.

Destine, who is known as a singer, rapper, producer, and entrepreneur, has a studio in the home and also provides housing for people with disabilities.  According to information that Destine gave police, a man repeatedly asked him for money and refused to leave his property.  As the man continued to hit the door of the home, Destine told a tenant to call 911.

As another tenant arrived and entered the home, the intruder took advantage of the opportunity and ran into the home. Once inside, he shoved Destine to the floor, causing him to strike the stairs. Destine pulled his handgun while on the floor, and the intruder began wrestling him for control of the gun. Destine, in fear for his life and the lives of his tenants, fire two shots.

The unidentified assailant was transported to North Colorado Medical Center with what police described as non-life-threatening injuries. Destine was also transported and treated for an injury to his elbow.

In an interview with local media, Destine said, “I tried really hard to shoot last second when I had zero choice. After I was hurt. Luckily no one else was hurt but me and the intruder. My training came in handy. I’m praying he recovers fine.”, adding, “I really had no choice. I had to protect my tenants, my cat, dog and studio equipment.”

Police are still investigating and have made no arrests in the case yet. Colorado does not have a “Castle Doctrine” or “Stand Your Ground” laws as many other states do.  Instead, they have a “Make My Day’ law, coining the popular line from the Clint Eastwood film Sudden Impact. The law states that any occupant of a dwelling may use deadly force against and intruder when the occupant reasonably believe the intruder has committed or intends to commit a crime in the dwelling in addition to the uninvited entry and might use any physical force, no matter how slight, against any occupant of the dwelling.

But remember: Giving the bad guy until the last second could cost you your life. Had the bad guy been able to gain control over Destine’s firearm, he could have been the one to be shot instead.