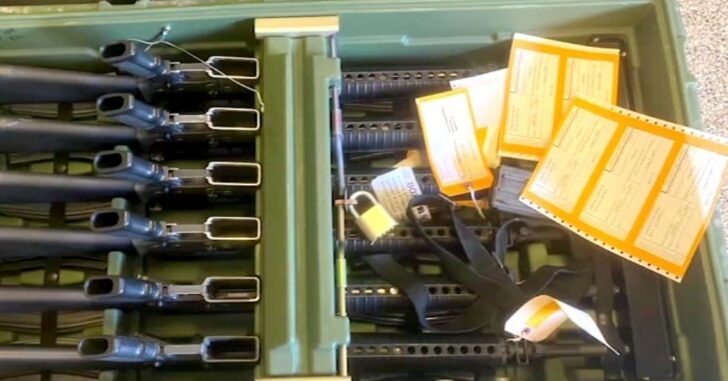 When you buy government surplus from the military, it’s supposed to be double and triple-checked that nothing “inappropriate” is in the lot that’s being sold. However, for one couple in Texas who buys large quantities of military surplus for resale, they got quite a surprise in cases designed to transport M-16 rifles.

One of the crates — no doubt heavier than the others — contained 12 M-16s…of all things.  Full-auto capable and ready to rock.

According to reports, the  rifles came complete with information about the units from which they came.

Of course, the FBI and the ATF were eager to recover the wayward firearms. And leave it to the ATF to get a warrant to search the entire storage unit, despite the fact that the honest couple immediate notified the authorities when they found the bonus prizes in the one case.

Federal authorities are trying to figure out how at least a dozen fully-automatic M16s ended up among military surplus equipment sold to a Houston couple.

The Bureau of Alcohol, Tobacco, and Firearms (ATF) executed a search warrant in a Richmond-area storage facility on Monday afternoon. However, that only came after the couple voluntarily notified authorities of their highly-unusual find.

Last week, the couple – who runs a side hustle of buying surplus lots, dividing up the products, and reselling them on eBay – received delivery of 108 empty storage cases sold by a government surplus website. Over the weekend, a friend helped the couple stack and store the cases. As a thank you, they gave one of the cases to the friend.

When that friend opened the case, he realized it was not empty. Inside were 12 fully-automatic M16s, all of them still with various tags designating the military branch and name of service members who handled the weapons. …

Unsure of what to do, the couple reported the M-16s to authorities. Within hours, ATF and FBI agents seized the one open box with the 12 weapons. Shortly thereafter, the ATF obtained a search warrant for the couple’s storage unit. They spent most of Monday on location, going through the boxes.

Without a doubt, several someones will have some ‘splaining to do over the rifles. After all, the .mil (allegedly) likes to keep a pretty close tabs on their firearms…unlike our neighbors to the south.

As for the (briefly) lucky couple, hopefully honesty is the best policy (though it got them a search warrant and an afternoon spent with some of the ATF’s finest. Still, I’m not sure failing to fess up to accidentally getting a crate full of Uncle Sugar’s fully automatic rifles is a good idea.

Previous article: Intruder Shot And Killed By Homeowner After Finding Gun In Home Next article: FL Governor To Looters: We Are A 2nd Amendment State