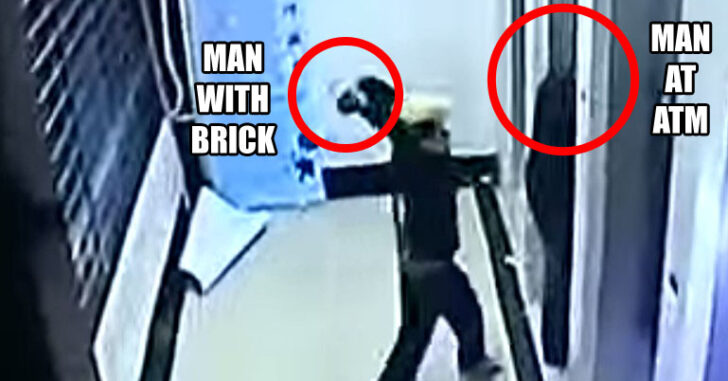 The video above is scary, and not easy to watch. This man in China targeted people who were using ATM machines and were simply not paying attention to anything happening around them.

We all need to hit the automatic teller machine on occasion.  Robbers know this, too, which is why they stake them out.  You would think they would be worried with all the surveillance systems surrounding a bank but if you’ve ever seen video footage from outdoor bank robberies – you’ll notice one thing: most are really poor quality.

Heck, these two bank employees got robbed reloading the ATM.

The bank isn’t worried about you losing your money – they don’t even seem too concerned with losing theirs.

So when you’re going to hit the ATM, maintain situational awareness.  Not only could it save you time and money, but it may just save your life.

Overall “Don’t”s While At The ATM:

Now let’s talk about specifics – i.e. what types of risks each sort of ATM presents and how can try to address those issues.

These are non-bank ATMs which can be seen in little booths along shopping centers and other places.  It doesn’t matter if it’s night time or day time, these can quickly turn into “fish in a barrel” sort of situations.  Here’s a host of red flags to help raise your SA:

If any of these flags pop, abort.  It’s a bad situation.  And don’t assume because the person doesn’t look like “the type” (whatever that means) that they don’t have the propensity to do some bad stuff.  You only get to underestimate someone once.

Course of Action:  Take a look around and size up the situation.  If you feel you’ll be unreasonably exposed and there’s reason to suspect someone may try to move in after you, go to a different ATM.

You’d think being inside a bank would guarantee some level of safety and security.  For the bank’s vault – it does.  You’re on your own.  A lot of indoor bank ATMs require a card to gain access but most of those card readers aren’t real particular about what card gets used.

Course of Action:  If you’re alone, be aware of your surroundings.  If someone comes in after you, make sure you’re good to go.  If you don’t feel confident you can handle the situation – attempt to leave immediately.

Outdoor bank ATMs are pretty popular for late at night.  They’re exposed, usually in open ground and there’s very little cover.  That’s what a predator would call a perfect situation.  The only thing you have going for you is limited freedom of movement.

Course of Action:  If it’s late at night, make it quick.  Have a friend watch your back while you’re on the terminal.  If you see people walking up, cancel your transaction and walk away.

Nothing beats the convenience of rolling down a window, swiping a card, and getting some quick banking done.  Unfortunately, it’s also a great opportunity to rob someone.  Being stuck in a car with your arms hanging out the window means your attention is focused on the big box with your bank account information on it.

This is what happened recently when a mother was robbed at gunpoint in Aurora.  ABC-7 (Denver) covered the story about a robber taking advantage of somebody’s momentary loss of situational awareness and using that as the leverage needed to get her money.  Worse?  Her children were in the back.  That’s a bad situation.

Course Of Action:  Rotate your field of view regularly.  Don’t stay fixated on the screen.  Even the occasional glance in the rearview and sideview mirrors will reveal a lot.  If you see someone approaching your car – hit the gas.  Your card ain’t worth it.

Above all else, your awareness of a situation is the only tool you guaranteeably have to avoid potential traps.  There is no guarantee any one approach will work all the time.  If you’re carrying a concealed firearm – and are being robbed – keep it hidden until you’re no longer at gunpoint.  Losing your concealed firearm is more dangerous than losing your cash.

Previous article: BREAKING: Marine Killed In Chattanooga Attack May Have Been Armed, Forensics Determining If Marine Shot Suspect Next article: Best Advice For Those New To Concealed Carry