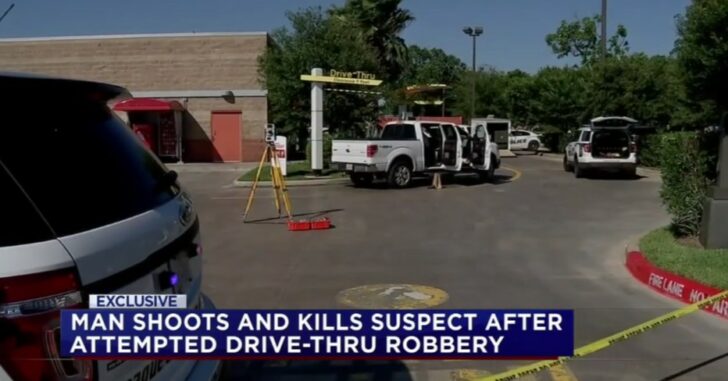 LEAGUE CITY, TEXAS — A father and his young son were in a fast food drive-thru when an armed robber came up to their truck and pointed a gun at the father.

Quickly taking control and trying to protect his son, the father struggles with the armed robber and produces a firearm of his own. He shot the robber three times, killing him.

A surveillance camera from a nearby cell phone store captured the incident, and employee Vanessa Stanford sprung into action.

The victim’s lawyer spoke with reporters, and highlighted the reality that we never know when trouble will come our way.

“Never would have dreamed in a million years that a McDonald’s drive thru, like blocks from the police station in broad daylight, 2 or 3 o’clock in the afternoon, something like this would happen,” said attorney Robert Pelton.

The victim is licensed to carry a firearm, and did what he had to do in order to protect his 4-year-old son and himself. The armed robber, who later died at the hospital, has not been identified.