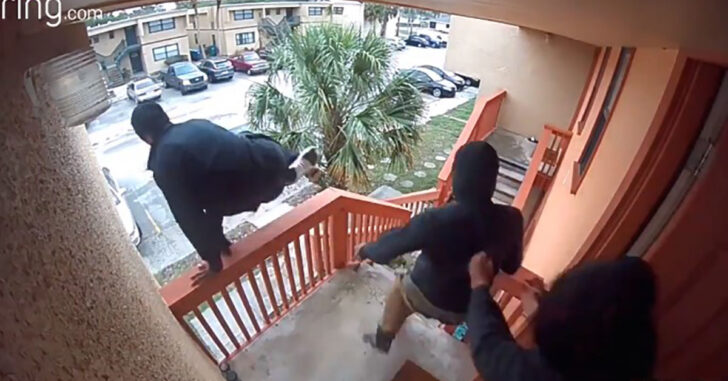 NEPTUNE BEACH, FLORIDA — One suspect was shot and two others are being sought by police after police say the three busted their way into an apartment on Tuesday.

A resident inside the apartment fired shots at the trio seconds after they broke down the door. It’s why we promote carrying even while at your home, because these invasions can happen in an instant.

A security camera outside the apartment captured some of the moments, including the break-in and ultimate fleeing. That footage can be seen below.

We are still looking for the 2nd & 3rd suspects. Remain anonymous and potentially get a cash reward for information leading to their arrests from @FCCrimeStop @ 1-866-845-TIPS.

Video may be disturbing to some. pic.twitter.com/69BPBub8qA

Did you see the first image of this article showing the three armed men leaving, with one jumping over the railing and hoping for the best? That’s what armed resistance looks like, and the only thing the bad guys want to do is to get to a safer place. Preferably, one where they aren’t being shot at.

After the self-defensive shooting, the criminal trio dropped off their buddy at the hospital who was shot, and then took off. Police are still trying to locate them.