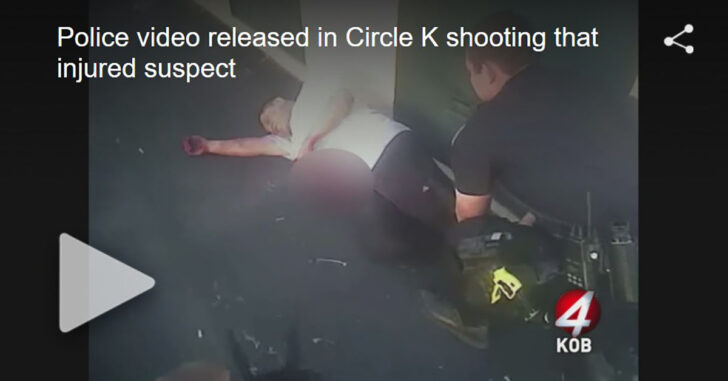 ALBUQUERQUE, NEW MEXICO — Police have released a video that shows a suspect being shot by an armed clerk as he tried to rob the place. Local news shares part of the story;

The clerk at that store had her own firearm. She says when he pointed his gun, she pointed hers right back and pulled the trigger. Police lapel footage and 911 calls released Wednesday capture those intense moments immediately after it happened. The video shows police approaching the injured man later identified as 23-year-old Ferron Mendez. Police say Mendez tried to rob the Circle K on Eubank and Candelaria. But when he aimed the gun at clerk Jennifer Wertz, she took action.

Wertz hit her target and the thug dropped his gun and wound up on the floor. Funny thing; his gun was fake. Mendez is out of jail now and awaiting the day he faces the charges, so let’s hope he sticks around to actually show up. Now, onto the responsibly armed clerk:

Wertz was fired from her job at Circle K. She says she knew it was against company policy for employees to have firearms at work, but she wouldn’t have done anything differently.

So the bad guy is out on the streets again, and the armed citizen is fired from her job? Both of these outcomes don’t sound like the reality I’d like to live in. Nevertheless, that’s the outcome so far. Circle-K, a word of advice; you may find that your locations would be robbed a lot less frequently if the world knew that you allowed your employees to be armed.
Categories: General, Guns Saving Lives, News