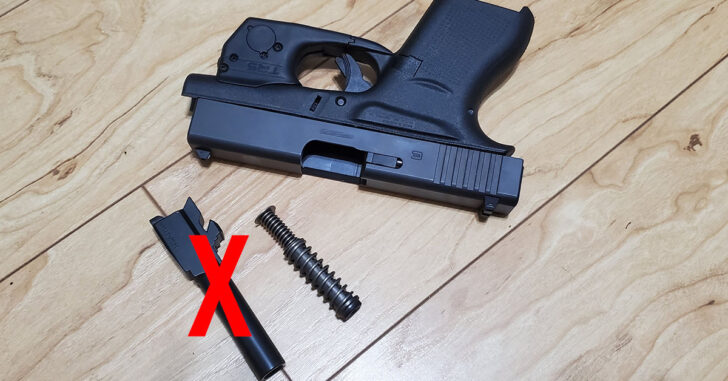 With efforts across the Country attempting to close down gun shops during the coronavirus pandemic, California decided to get creative with a new bill that passed late last night. This after the DHS deemed gun shops as essential businesses.

Instead of mandating that gun shops close, they separated items that can be sold to customers at the same time.

The bill requires that a gun be sold without it’s barrel, and then the customer could come back to the gun shop 4 weeks later to pick up the barrel.

An example: Joe goes to his local gun shop to buy a Springfield Hellcat. After satisfying payment and background checks, Joe can take home the Hellcat without the barrel. Then, after 4 weeks has passed, Joe can return to the gun shop to pick up the barrel.

For guns that do not have removable barrels, such as revolvers, the cylinder would be removed and available for pickup one month after purchase.

“While background checks are still important, this approach handles cooling-off periods as well. The customer can still get their gun, but will have to wait for it to be fully functional,” a state representative said. “It’s the best of both worlds, really, and technically doesn’t infringe on anyone’s rights.”

The representative went on to discuss what a person could do with the barrel-less gun if they found themselves in a self-defense situation, stating “Even without the barrel, you still have a very hard object that can be thrown in an attacker’s direction.”

The new bill went into effect Wednesday morning at 12:01 am, and affects gun stores state wide.

This is the fifth year in a row that we’ve written an April Fools article, and we hope you enjoyed this one just as much as the others!

Previous article: NJ Governor Allows Gun Shops To Re-Open As Essential Businesses After Lawsuit And DHS Guidelines Next article: Not April Fools: Man Being Chased By Dinosaurs Is Shot While Trying To Enter Home Of Armed Woman