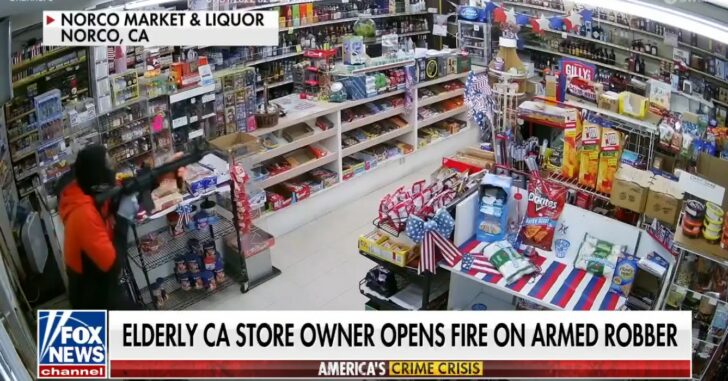 NORCO, CALIFORNIA — An 80-year-old man and owner of a convenience store used his shotgun to defend against a group of armed robbers with rifles. The incident happened early Sunday,

“I would always protect my employees, my customers, myself. This instance, fortunately, I was here by myself, so I only had to worry about that. I took care of it and that was that,” the owner told reporters. “I did a lot of hunting when I was a little kid,” he added. “I’d put food on the table. So, I still remember things from a long time ago.”

As soon as the attackers came in, the owner grabbed his shotgun from under the counter and fired. The owner knew something was off by the way the group parked their vehicle outside, and he was paying attention to every little detail.

Surveillance video was released and shows the incident as it unfolded, and how quickly the owner reacted to the situation.

Later, four people were arrested after they all showed up at a local hospital. One of the men was shot, which police say the wounds are consistent with what a shotgun blast would cause.

“When I looked and saw them getting out of the vehicle, they got gloves, masks, a weapon, that just solidified the deal for me, I knew what was coming,” he added.

The owner suffered a heart attack as a result of the incident, but is expected to make a full recovery. He was back to work just a few days later.

Previous article: Store Clerk Shoots Man After Being Attacked With Knife Next article: Man Shot And Killed After Pointing Gun At Someone Outside Restaurant