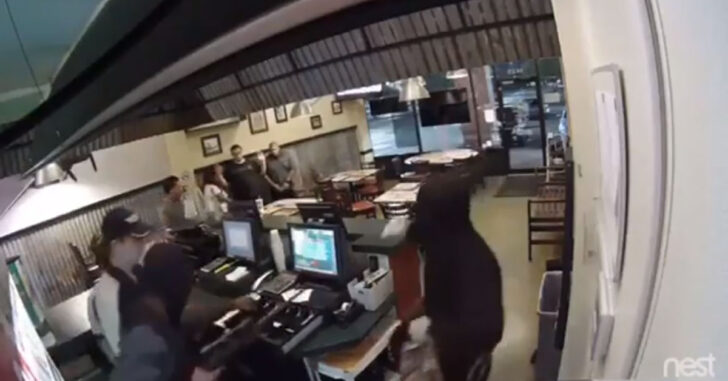 If anyone knows where this surveillance video is from, please let us know.

All we have to go on is the video, and it speaks volumes from the armed citizen’s standpoint.

First, watch the video below. Then continue on.

We’re under the impression that the armed citizen is not an off-duty police officer, mainly because he had to rack the slide to fire the first shot.

As the two armed criminals come in, they’re relatively organized. They have all customers line up against the wall and they b-line it to the registers. They get the cash in a hurry, go back to the customers to shake them down a little more, and then they’re on the way out.

On their way out faster than they anticipated, by the looks of it.

The customer against the wall, 2nd from the right, draws his handgun as the robbers leave the restaurant. His light pops on, he racks the slide, and lets off 8 rounds in just a few seconds.

I was waiting for a robber or two to drop, but that didn’t happen. If they suffered any gunshot wounds, we don’t know from the video. It’s possible they did, but it’s also highly possible that the armed citizen missed his shots.

The biggest takeaway from the video; Don’t shoot a fleeing criminal. If they’re on the move in the opposite direction, they are no longer a threat to you or anyone inside the building. If you didn’t have a chance to act while they were doing the deed, let them go and give police a great description.

What if the bad guys decided to fire back? The armed citizen, against the wall with 3 other people, would have all been in danger at that point. If they’re going, let them go.

Would the armed citizen have had a good opportunity to draw and fire on these two robbers? I’m not so sure. If there ever was a chance, it’s around the 32-34 second mark, but even then it’s challenging.

What are your thoughts? How do you think this situation was handled?

While we don’t know the outcome, do you think that the armed citizen will be/was charged with any crimes? Chime in below.

Previous article: Illegally Armed Security Guard Shoots Teen And Himself On Train During Struggle, And The Gun Never Left His Pocket Next article: Prisoner Released Early Due To COVID-19, Breaks Into Woman's Home, Ties Her Up, Holds Her At Knifepoint