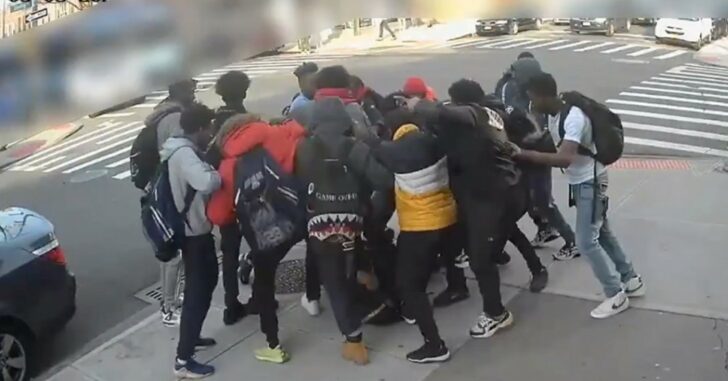 NYC, NEW YORK — A teenage girl, who was walking down the sidewalk by herself, was attacked by a large group of teen boys. Their purpose was to rob her, and the incident is sending shock waves through the city.

Warning: The video below is graphic and may be upsetting to some viewers.

These teens haven’t a care in the world, especially in NYC where they know that the good guys and gals aren’t armed. I’m not saying that a 15-year-old girl would have a firearm, because she legally couldn’t, but none of the man bystanders did either.

It would seem that they were after… her shoes.

The paper reported the girl was robbed of her Air Jordan sneakers.

Being able to carry a firearm within city limits requires you to be a politician, police officer, movie star or the likes. Not us poors.

The video begins with the girl already on the ground and one of the boys kicking her in the chest and face, the New York Post reported. He is then joined by the others, including one who jumps on top of her, then kicks her in the head.

It’s a hard thing to watch, and you have to wonder how a group of people –or anyone– can attack a teenager like that. It’s unthinkable to those of us who have non-primitive brains, and it’s a disgusting thing to see.

With that, situational awareness plays a roll in this video. If the girl had seen the danger coming, she should have high-tailed it to the safest place she could find. It’s a terrible situation to be in, especially when facing multiple attackers.

The girl was treated at the hospital for bruises and head injuries. Her condition is not known.

As for those responsible, let’s hope they’re all eventually caught and face the full force of the law. Which probably means they’ll be back out on the streets before dinner.