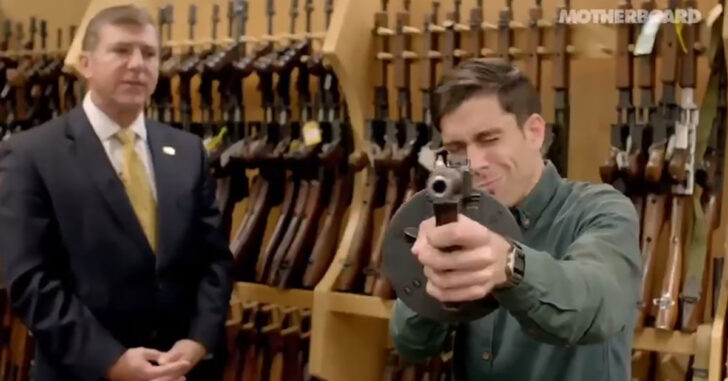 You have to hand it to some reporters, and everyone else who pushes the ‘smart gun’ topic. The efforts to realize ‘smart guns’ is supposedly to stop unauthorized access to firearms, and to stop ‘accidental’ shootings.

The truth about ‘accidental’ shootings is simple; Replace the word with ‘accidental’ with ‘negligent’, and this reporter shows us just what a negligent shooting would look like.

Still can’t get over that a Vice reporter, in a video on “smart guns” helping prevent accidental shootings, decided to it was a good idea to point a Thompson, that had a drug mag in, at his cameraman, pull the trigger, and then say, “I didn’t think it was going to do that.” pic.twitter.com/O3M3kLd0Ag

As a refresher, one of the 4 Rules of Firearm Safety is this:

Never point a firearm at something you are not willing to destroy.

As soon as he pulls the trigger, the negligent holder of the firearm proclaims; “I didn’t think it was gonna do that.”

This reporter is the new poster child for irresponsible firearm handling, and we can only hope that he realizes this fact.

Every day we help to educate people on proper and safe handing of firearms, and one of the top rules is to never point any firearm at anyone unless you are doing so to stop a threat. It doesn’t matter if you know that the firearm is 100% unloaded, because we always treat every firearm as if it were loaded. Always.

Previous article: One Armed Citizen Against Three Armed Robbers; Guess Who Wins? Next article: Woman Shoots, Kills Her Rapist As He Was Trying To Kill Her Brother; Faces Life In Prison