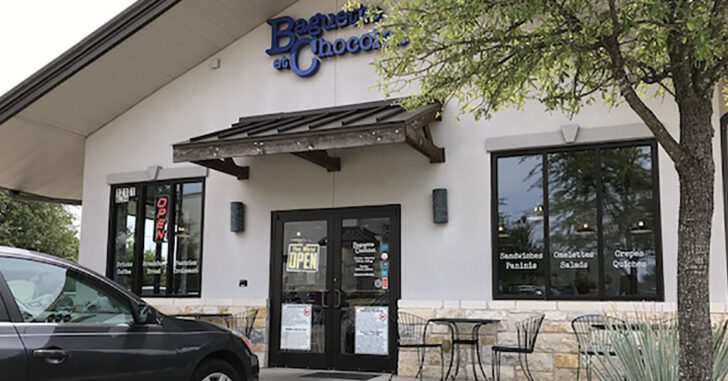 Robert over at TTAG recently shared a story about one of his favorite establishments and their dislike of guns. Well, maybe it’s not his favorite, but apparently they have some bread that will keep you coming back.

In any event, Robert was asked to leave by the owner –indirectly– by way of calling the police to inform them that someone was carrying a concealed firearm inside their restaurant. They either saw that he was printing, or remembered him and assumed that he had a firearm on him as he sipped his coffee.

Either way, here’s the story:

So there I was, eating the world’s best ham sandwich at Austin’s Baguette et Chocolat, when two cops entered the patisserie and approached the counter. I thought nothing of it. Neither did Heidi. And then my spidey senses began to tingle . . .

Cop one was in a quiet conference with the owner, who stood behind the counter. Cop two positioned himself against a wall, arms crossed, staring across the room. Not at me and Heidi. Across the width of the room.

My first thought: it’s an immigration issue. My second thought: that’s stupid. They’re not Immigration officers. And B&C’s employees don’t seem like the undocumented sort, if you know what I mean.

As Iris Dement recommends, I let the mystery be.

To the point where I asked the not-so-dynamic duo if they were staying dry (a day after Harvey whacked Houston) as I returned to the counter and bought a cup of coffee. They nodded without any apparent understanding or bemusement — not an entirely unfamiliar response to my “clever” comments.

At some point, officer one approached our table from behind.

“Excuse me sir, are you armed?”

As Hunter Thompson reminds us, when the going gets weird, the weird turn pro. In this case — as in all of my various interactions with the constabulary — I became slow-moving, polite and stupid.

I turned to look at cop one, surveyed my surroundings and tried to guess what was about to happen.

“Are you armed?” he repeated.

My ability to answer this simple binary question was short-circuited by the cop’s blue eyes. Paul Newman didn’t have eyes that blue, and his eyes made the blue sky green with envy.

“Yes,” I answered, gathering my wits enough to realize my mistake. When Texas passed licensed open carry, Baguette et Chocolat put up the requisite big-ass, door-mounted signage banning both open and concealed carry. I shared my disappointment with the manager and politely informed her that she’d lost my custom, and the custom of my TTAG staff.

And then . . . bread. Call me a hypocrite, accuse me of giving aid and comfort to the enemy, but B&C’s baguettes were a siren song this gun rights absolutist couldn’t resist.

Prior to that fateful afternoon, I stashed my gat in the car before entering the patisserie. That day, though, I forgot. I was wearing my Wilson Combat EDC X-9 in a Kydex holster under a T shirt. I was barely printing. But apparently enough to trigger the owner’s PC hoplophobia.

“Did you see the signs?” the officer asked.

“I thought they were just thirty-ought seven signs,” I replied, reckoning that both “no” and “oops, I forgot” wouldn’t cut it.

The officer’s blue eyes clouded with confusion. Clearly, he had no idea what I was talking about.

“Well the law’s always changing,” he said, suddenly trying to help me out. Calm me down. Prepare me for a ticket. Cover the fact that he didn’t know what the hell I was talking about. Something. “Have a look at the signs.”

Seriously? He wanted me to get up, go outside and read the signs? I glanced at his partner. He was deep into his bad-cop-at-a-distance, waiting-to-see-if-the-perp-complies routine.

“I’m sorry officer,” I said after pretending to read the signs and re-entering the cafe. “I thought it was no open carry.”

I nodded at Heidi, put on my hat, made another apology and exited B&C stage right.

And that was that.

My bad, right? But I’m still annoyed that the owner called the cops.

I was a regular customer. I’d just bought $30 worth of food. I was with an attractive young lady. I was dressed well. I was calm and polite to his staff. All the owner had to do: ask me to leave and/or disarm.

I suspect I’m persona non grata at Baguette et Chocolat as a result. Luckily, I’m now on the ketosis diet. Even so, it’s a grieving process; I’m in the depression phase. Or maybe it’s just the lack of carbs.

Heidi and I were enjoying each other’s company in B&C for a good twenty minutes before the officers rolled up. I wonder if the owner ever considered how long it would take the cops to respond to an armed robbery or other violent incident. Probably not.

It’s an interesting encounter, and I sit here wondering how I’d react in this situation. I still don’t know, but I’d probably wind up talking to the police outside a little more to dig a little deeper about how they feel about it. Regardless, if a private business doesn’t want you there with a firearm, that is their choice.

As a concealed carrier, what do you think about this encounter?