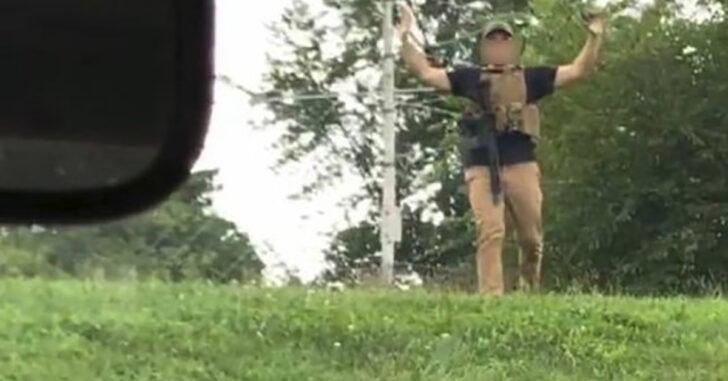 SPRINGFIELD, MISSOURI — A man in his 20’s drove to a Walmart, and then walked inside and grabbed a cart. He started pushing the cart around the store, all while live-streaming his movement.

Did we forget to mention; he was carrying a rifle and handgun, over 100 rounds of ammo, as well as wearing body armor and military fatigues.

The store manager pulled the fire alarm as customers started to panic after seeing the man inside the store. That’s a valid response, especially considering the events that happened in the last week.

As everyone scrambled for safety, the man walked out a fire exit and was greeted by an off-duty firefighter with a gun of his own, and was held at gunpoint until police arrived.

Lieutenant Mike Lucas said it was clear the man’s intent was to cause chaos, saying in part, “His intent was not to cause peace or comfort…He’s lucky he’s alive still, to be honest.”

Missouri is an open carry state, as well as constitutional carry. There is a chance that the man was not in violation of any laws, but that still doesn’t mean his actions were a good idea.

The concealed carrier here, or possibly open carrier, acted within absolute reason. What makes a man walk into a Walmart, of all places, in such a manner is beyond my comprehension.

Lieutenant Lucas is correct in his statement. That man is lucky he’s still alive.

Stupid gun owner? Potential mass killer who lost his stones? We may never know. What we do know; idiot move.

Previous article: Man Kills 4, Injures 2 In Hours-Long Stabbing Rampage In California Next article: Another Person at the El Paso Walmart Shooting, Who Usually Carries A Gun, Didn't That Day