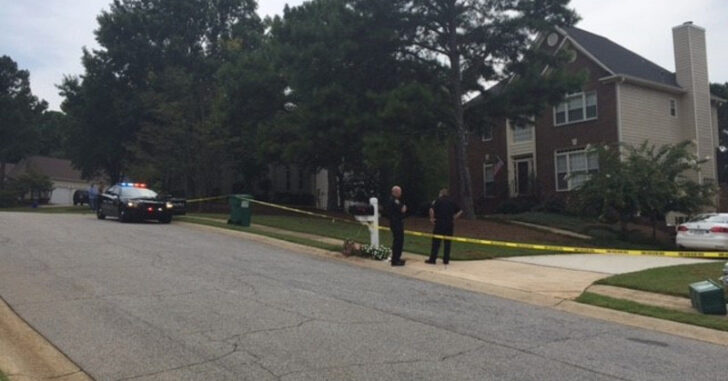 FAYETTEVILLE, GEORGIA — Police say the homeowner’s son saw an armed man tinkering with the garage door of the house around 3 pm.  The house is located in a relatively secluded cul-de-sac that doesn’t see a lot of through traffic.  Without hesitation, the son went upstairs and got his father’s handgun.  The armed burglar, by this time, had abandoned trying to break in through the garage and broke in through the back door instead.  The son then placed four shots into the intruder.

According to WSBTV, the intruder was transported to the hospital in critical condition and the son was taken into police custody.  No formal charges are pending but police are still trying to ascertain all of the details.

Police acknowledged they’ve taken the son down to the station more as a way of getting him away from the scene of the incident.  According to WSBTV’s news report, Lt. Mile Whitlow of the Fayetteville Police Department described the boy as “pretty shaken up” and the police are focusing on simply trying to reconstruct the scene to get a better understanding of why the intruder was there and what his motivations were.

This is certainly a very harrowing story.  Each day, plenty of children return home and hang out unattended until parents arrive later from work.  The thought of an armed intruder trying to break in – even in a good area of Fayetteville like this – weighs heavily on a lot of parents’ minds.  Thankfully, the son was able to respond quickly and effect judicious shooting on behalf of the home.  There’s no way of knowing what the intruder’s motivations are because he’s currently unable to speak and his recovery is uncertain at this time.