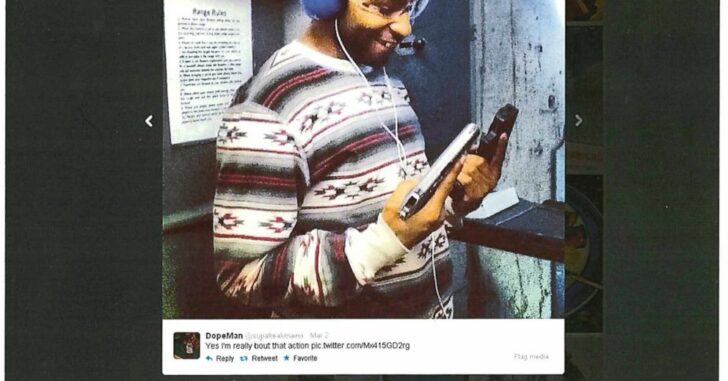 Kwmaine Davis, a convicted felon, is heading back to prison for 18 months after he posted a few photos of himself holding handguns on twitter. As a convicted felon, Davis cannot possess or even touch any firearms…ever. The local PD got word of this photo and forwarded it to federal agents and ultimately arrested.

When confronted by police with the Twitter photos, Davis agreed to plead guilty to being a felon in possession of a firearm.

He was sentenced to prison after saying he accepted responsibility for his actions and wanted to turn his life around. Davis, 23, told U.S. District Judge Denise Casper that he plans to go to counseling, return to school and find a job after his release.

Davis, a known gang member, has been shot twice and was picked up before on gun charges. Now he’s ready to turn his life around? We’ll see, but it likely won’t be the case.

Davis’ lawyer pointed out that anyone else shooting at the range was perfectly legal, and that Davis didn’t leave with any of the firearms…

Good for him? It says a lot about one’s character when you feel the need to let people know that.