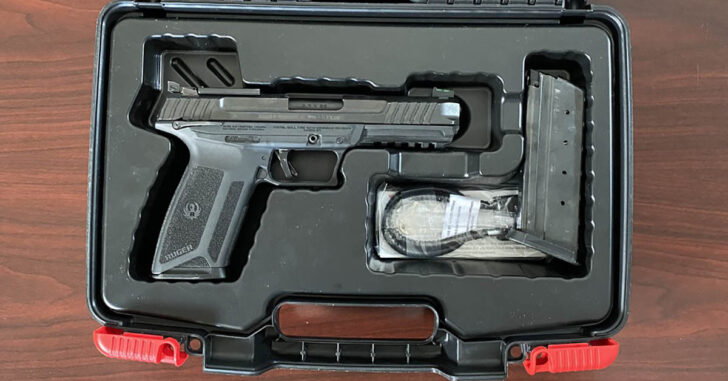 If you haven’t seen the new Ruger-57 yet, you’re in for a nice surprise. This one threw me for a loop at first but I can’t help but love it the more I dive into it!

One thing that makes me wonder, why now, Ruger? The best answer I have to that is the fact that Ruger has had over a decade to make their version of the FN Five seveN, all while designing it around newer features more common in firearms today. The Five Seven from Ruger is Brilliant. Let me break it down for you. The Ruger has slimmer magazines with the same 20-round capacity, a slimmer grip, a better-designed 1911-style ambidextrous safety, a Glock-style trigger, and a lower bore axis.

It’s as if they took all the flaws of the FN and wrapped it up into a nice, new package. Like the Five seveN from Fabrique Nationale, the Ruger-57 is chambered in 5.7x28mm. The round is similar to a shrunken down, miniature 5.56. If we go back to When FN launched theirs, you’ll see it was made with a rifle as well so the rounds could be interchanged between the issued primary and secondary firearms. Neat concept but it didn’t go very far. One issue is the magazines were completely different. With the increased popularity of pistol caliber carbine rifles, one can assume Ruger isn’t done with just this one. I think we will see the Ruger PC come out in 5.7×28 and share magazines with the Ruger-57 handgun. That should also mean we will see 30-round magazines or even higher that could be shared on either platform.

I also believe we might see additional calibers for the new handgun as well as the carbine. Options I’m sure they are considering would be 17 HMR, 22 Magnum, and 22 Long Rifle. Again, this is speculation but I guarantee they’ll do something along those lines.

Ruger created something I’m sure any of us asked for but it definitely got our attention and brought some new life back to a caliber that’s been asleep for a few years. Thank you, Ruger. I’m looking forward to seeing where this one goes!

Check out our Youtube channel, The Armorer’s Fix for a full video review on the Ruger-57 and comparison with the FN Five seveN. Let us know what you think is next for Ruger in the comments!