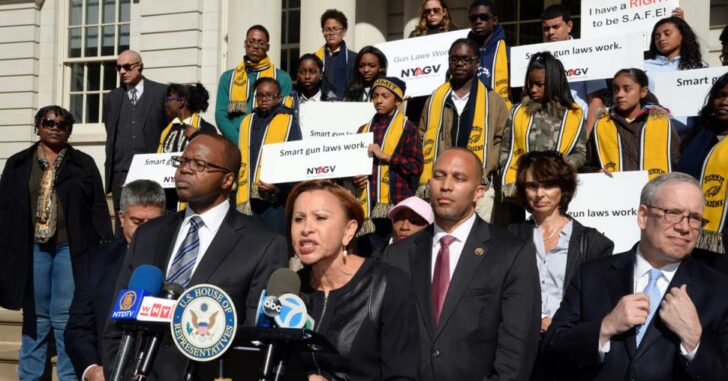 Let’s say you’re a dedicated anti-gun politician. Things haven’t been really going your way in recent years. Not only are Americans are buying more guns than ever before, but at the same time that the number of guns increased by 50 percent to over 300 million, violent crime dropped to historic levels. That kinda makes it hard to argue that the problem is, you know, guns. What’s worse, the public seems to be catching on to all that. So what’s an anti-civil rights nanny state legislator to do? Simple! Make it more expensive for all those psycho gun nuts to buy their instruments of death . . .

A new bill to reduce gun violence aims to hit would-be weapons buyers where it hurts — in the wallet.

U.S. Congresswoman Nydia Velazquez is introducing a bill that would slap every gun sale with a $100 tax, and then use the extra money on anti-violence and mental health programs.

It’s less about anti-violence and mental health programs than it is about making gun ownership incrementally more difficult. That which you tax, you discourage. And as the House civilian disarmament caucus sees it, anything that results in fewer guns sold is a step in the right direction.

Velazquez represents New York’s 12th Congressional district covering parts of Manhattan, Brooklyn and Queens, so hopeless public stunts intended to show she’s “doing something” about the problem of guns aren’t only to be expected, they’re part of the job description. While having no chance of passage, the bill will attract the usual suspects as co-sponsors and it got her some good press so mission accomplished.