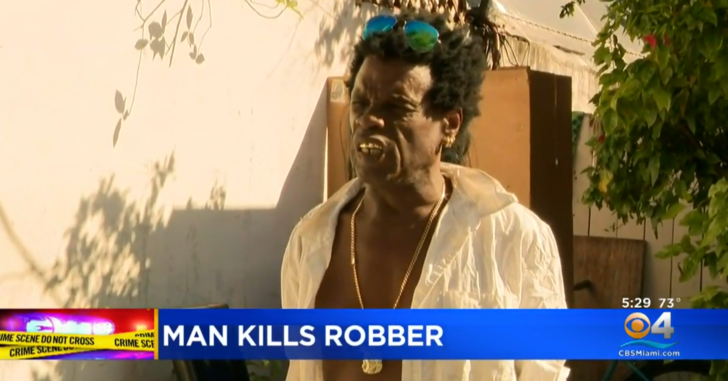 MIAMI, FLORIDA — He may dress and speak crudely, but what we have here is a classic tale of a legally armed American defending himself and his family. A car thief armed with an AK-47 tries to rob a van at gunpoint, and is met with lethal force.

“The guy I killed last night, he put an AK-47 to my damn face,” said Donovan Stewart.

Stewart told CBS4’S Peter D’Oench that he had to act quickly because he was worried about the safety of his 11-year-old son and girlfriend who were in the van with him.

“I am from Kingstontown in Jamaica,” he said, “and I am not going to go out like a punk. So I emptied my Glock in his chest. “

“So I thought you are you going to kill me so now I have to act quickly because I am trained,” he said. “You know I have a security license, I have a G license and I have a state firearms license and a concealed weapons permit and I have a gun and I am a member of the NRA.”

This guy checks all the boxes for “legally armed citizen.” He has all the licensing, permits, and gun club affiliations. He was trained well enough to draw and empty his Glock while they had an AK pointed at his head.

Considering his child and girlfriend were also in the van, Stewart, had no choice but to act. If he and his family were going to live, he needed to do respond to the violence with his own methods.

Police are still investigating the crime, but so far it looks like a case of self defense. In fact, while police were on scene, another couple approached the police and identified the dead robber. This was the same man who robbed them at gunpoint several days earlier.

From all accounts, Stewart not only saved his family, but permanently stopped a bad guy from roaming the streets and robbing people at gunpoint.