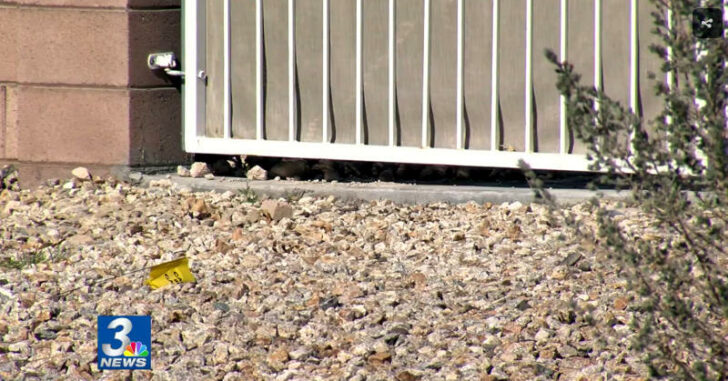 LAS VEGAS, NEVADA — ‘Absolutely nuts’ is the only way to describe the antics of a recent home invader.   According to authorities, a man went door-to-door trying to break into people’s homes before finally crawling in through one homeowner’s doggie door…  Armed with a twelve inch knife.  This is what neighbors and witnesses are alleging after the aforementioned home invader was shot in the face trying to crawl in.

[One neighbor] says the intruder banged on her door before he was shot. She remembers getting a call from a neighbor about the suspect hitting her door.

“She said, ‘Are you ok? Are you ok? Someone is trying to kick down your door.’ I said, ‘Oh my gosh!'” said the neighbor.

This is the type of terrifying behavior that criminal elements exhibit when they are both desperate and fear no danger from the likes of law-abiding citizens.  According to witnesses reporting to the news and Las Vegas police, this guy tried three times before finding the “Goldilocks” entrance of one home’s doggie door.  Whoever would think, after attempting entry on two separate homes, that a doggie door would be a good idea is obviously someone not playing with a full deck of cards.

To boot, this guy was armed with a twelve inch knife.  It’s safe to say, not only was he mentally “not there”, he had no problem with bringing that bag of crazy with him once he got inside.

The homeowner who ended this madman’s escapades happened to be waiting on the other side of the door with a gun.  The man had only to stick his face in through the doggie door at a back entrance before he was greeted with the warm welcome of lead.

Don’t think it can get crazier?  It can and it does.

Well, after the man was arrested and transported to the hospital (that’s right — he survived), he alleges that he was being chased and needed to find shelter in someone else’s home.

Controlled substance?  Let’s go ahead and guess this guy isn’t a kingpin from Breaking Bad.

This is why we stay armed at home and why we continue to carry even after we return to the comfort of our own abode.

As for the homeowner, when police arrived he promptly told them where his gun was and stood by for their assistance.  The police reported absolutely no issue with the man and he has not been brought up on any charges.  That’s precisely how it’s supposed to go.

The doggie door, however, may have worked double duty that day.  Not only does it let man’s best friend outside for a little relief — apparently it also works as an idiot trap when drugged out home invaders try to crawl in with a knife.