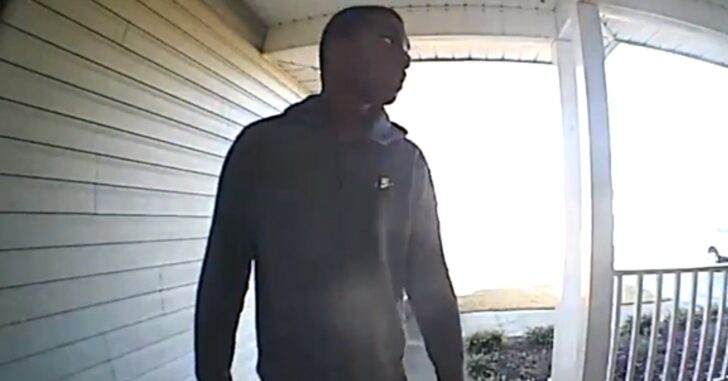 TAYLORS, SOUTH CAROLINA — A man went knocking on doors, and approached a woman at one home and asked her for jumper cables. She told him that she didn’t have any, and the man left.

He went to additional homes, and ultimately came back to the woman’s home. This time, however, he forced his way inside.

Once back at the victim’s house, the man forced his way inside, grabbed her by the neck and threw her down, according to deputies.

When the victim pulled out a pistol, the man took off running. The video of the man was captured by a nearby resident’s surveillance camera. You can watch it above.

Did you read that last part? It would seem that the woman was carrying her gun, and it was all that was needed to send this guy running to the hills.

Had she not had a firearm, we don’t want to think about what the outcome could have been.

Police are still looking for the suspect, and we can only hope that he’s located soon, so that he isn’t able to successfully turn someone into a victim.

For the people out there who feel that citizens shouldn’t have firearms, let this be a loud statement against that thought process. Even without firing a shot, this woman was able to successfully defend herself against another person looking to do her harm.

If that’s not cause for fighting for our 2nd Amendment rights, I’m not sure what is.

Previous article: Man Finds His Stolen Car, Holds Thief At Gunpoint Until Police Arrive Next article: New York Times Tells Readers What To Do If A Guest Brings A Firearm To Thanksgiving Dinner