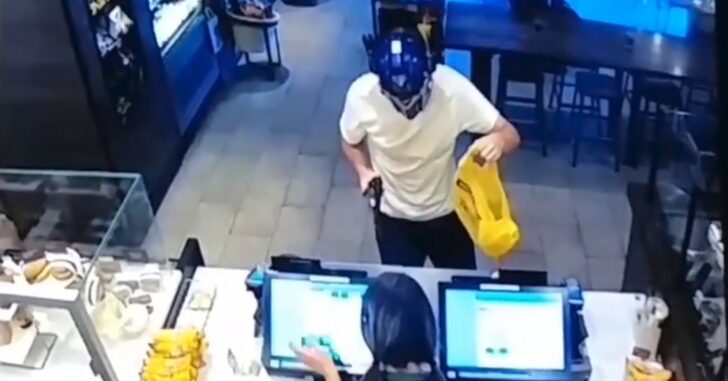 This is one of those interviews that you have to see to believe. But first, you’ll need to know the back story that leads up to this mother’s defense of her son.

Around 5:30 Wednesday, investigators say Ryan Flores walked into the Starbucks with a knife and a toy gun, and demanded money from an employee.

When customer Cragg Jerri saw what was happening, he picked up a metal chair, came up behind Flores and hit him in the back.

Video then captures the two fighting.

Jerri was stabbed in the neck during the fight, but Jerri was able to wrestle the knife away from Flores and stab him multiple times but was still able to run away. Police caught up with him shortly after.

This all happened in July of 2017. Then in September, Flores’ mother went on national television to defend her son, and to say that the Good Samaritan used excessive force when he hit her son with a chair and stabbed him.

Give it a watch below:

The reasoning behind this woman’s thoughts is just mind-boggling, and it makes my head hurt.

Her son is a father and is said to have tried to rob the Starbucks so that he could feed his family. I’m no expert, but I’m sure that there are other ways to go about doing this. I know that people get in desperate situations in life sometimes, but there’s a line that should never be crossed.

Had an armed citizen been inside the Starbucks and taken action, Flores could have easily lost his life, and the person behind the trigger would not have been charged because Flores posed a deadly threat when he brandished the firearm and knife. It doesn’t matter whether or not the firearm was real, because the perceived threat was definitely real.

Flores was found guilty in November and was sentenced to 4 years in prison a month later. He can’t help his family out if he’s in prison, now can he?

But wait! The justice system!

The defendant’s lawyer, Richard Esquivel, said Flores will only have to do two years of his four-year prison sentence because the jury ruled that Flores did not cause great bodily injury to the victim who stopped the robbery.

For all that he put Jerri through, as well as the employees inside the store, he’ll be behind bars for a whopping 2 years. It does mention that Flores had no criminal history prior to this incident, but it still shows an unstable individual that, frankly, isn’t doing enough time for the crimes committed. That’s just my opinion.

And to top it off, there could be a lawsuit against Jerri for his HEROIC actions. Who would sue? The robber, of course! While nothing would stop a criminal from suing this or her victims, it’s not likely to be very fruitful since Flores was convicted and sentenced to prison.

Either way, let’s hope that Jerri doesn’t have to deal with a lawsuit. That’d be insane and unnecessary, to say the least.

Previous article: School System In Georgia Will Start Allowing Employees To Carry Firearms Next article: AMAZING: Armed Homeowner Scores Bloodless Victory With a .22LR and a Lot of Guts