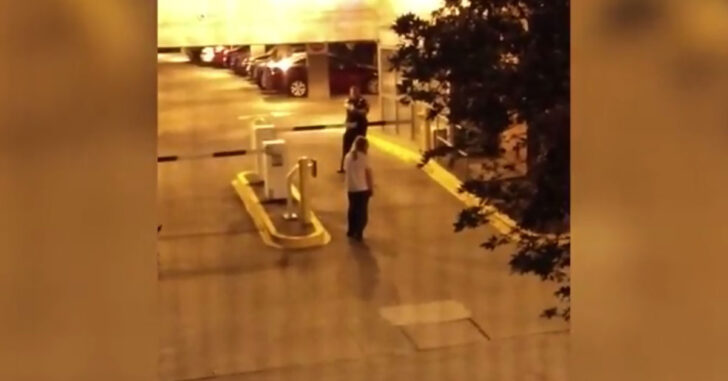 The video below shows 21-year-old Scout Schultz slowly, repeatedly advancing on two Georgia Tech campus police officers, reportedly while holding a knife. If you listen closely, Schultz can be heard telling the officers, “Shoot me.” After repeated warnings, one officer shot Schultz center mass, killing him.

Schultz’s parents are questioning why the responding officers didn’t use de-escalation tactics.

They have hired trial attorney L Chris Stewart to represent them ahead of the investigation into Schultz’s death, which came after they were filmed walking toward police – who issued several warnings to drop what the cops believed was a knife.

Footage of the tense encounter shows the student walking closer and closer to the police officers and shouting ‘Shoot me!’

‘Nobody wants to hurt you,’ one of the cops can be heard saying before a shot rings out and Schultz crumples to the ground, screaming out in pain.

The officers haven’t been identified and it isn’t clear yet whether or not they were carrying less-lethal weapons such as TASERs or were trained in de-escalation tactics.

Stewart will hold a press meeting Monday, in which he is expected to question whether the officers involved had training for dealing with mentally ill students.

It’s unclear what mental illness Schultz may have suffered from.

[His] father, Bill, wrote about the shooting on Facebook and said Schultz had a ‘tiny knife.’

‘[Police] didn’t have to shoot [Scout] in the heart, but that’s what they did,’ he wrote.