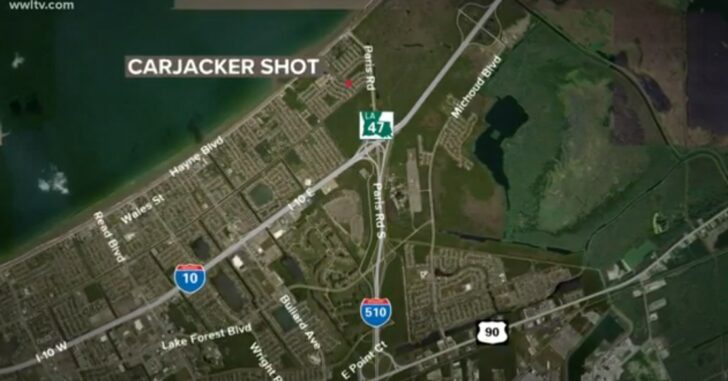 NEW ORLEANS, LOUISIANA — An armed carjacking suspect fled, leaving a trail of blood, after his intended victim pulled out a gun of his own and fought back.

A string of carjackings have been reported in New Orleans, and the reporter of this article seems to be in line with armed citizens defending themselves.

One second, a gun is in his face and a man is demanding he give up his car.

The next second, a would-be victim of yet another carjacking in New Orleans takes a chance. He reaches for his own gun, turns and puts two rounds into the attempted robber. Bleeding, the unknown suspect runs off in the night.

That’s what New Orleans Police Department officials say happened on Friday around 9:15 p.m. in New Orleans East, at the 7600 block of Forum Boulevard near Paris Road.

Instead of becoming the latest vehicle robbery of the hundreds under investigation in the Crescent City this year, initial NOPD reports show the attempt was foiled after the suspect was shot by the man he was attempting to steal from.

The 35-year-old man was sitting inside his vehicle when police say the armed attacker walked up and pointed the gun at him. The suspect told the man to get out of the vehicle, but we all know how that ended.

That suspect is still on the run, and likely requires medical attention.

Some would give up the car, others would fight back. This man decided to fight, and we’re glad that he won. Compliance isn’t always the best option, nor is it always the worst option. Each scenario is different, and it’s up to the armed citizen to determine what to do, given the circumstances.

Previous article: Woman Charged With Armed Robbery After Desk-Popping In McDonald's Because Her Fries Were Cold Next article: Man Is Shot In Chest After Assaulting Woman At Apartment Complex