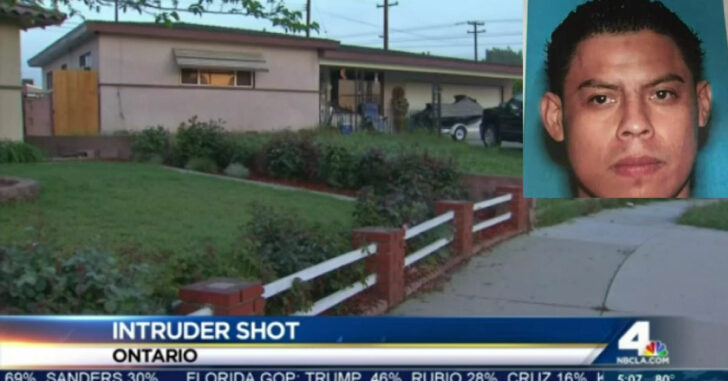 ONTARIO, CALIFORNIA — A man still clutching papers from his release from prison broke into a family’s home before being shot by the father. Neighbors say the home invasion suspect had allegedly attempted multiple door handles before breaking into this family’s home by way of their daughter’s bedroom.

The homeowner found the man in his daughter’s room after his son said he saw the man heading around the back of their house. He had called 911 earlier reporting a shirtless man clutching a bible and wandering around the neighborhood, attempting to gain access to people’s homes. The homeowner told 911 prior to the break-in that if the suspect showed any signs of aggression, he wouldn’t hesitate to shoot. As it turns out, that’s precisely what he would end up having to do.

“I had complete tunnel vision. I didn’t know I hit him until he fell on the floor,” the gun owner said. “He didn’t look violent. He looked like a guy who really needed help because I wasn’t startled.”

The suspect, identified as Jose Andres Alfaro Chavez, had just recently been released from prison and had been picked up by the police earlier in the day. He had been dropped off at his family’s house but had allegedly left and wandered off.

While the homeowner who shot Chavez is cooperating with authorities, it looks like not only did authorities know that Chavez had the potential to pose a problem to people in this neighborhood — they passively condoned it by not acting on that information sooner.

Neighbors — including the homeowner — had reported Chavez’s activities to police but police did nothing. As such, it seems more than reasonable that the homeowner would protect himself after this mad man entered his home by way of his daughter’s bedroom.

We’re not always dealing with potential threats that are playing with a full deck of cards. It’s completely obvious that Chavez needed psychiatric help and his past interactions with law enforcement reflect that. If law enforcement are not able or willing to protect their community, it appears that the responsibility ultimately falls to home owners and concealed carriers to do so. That’s both unfortunate and a reality that we must all have to face.