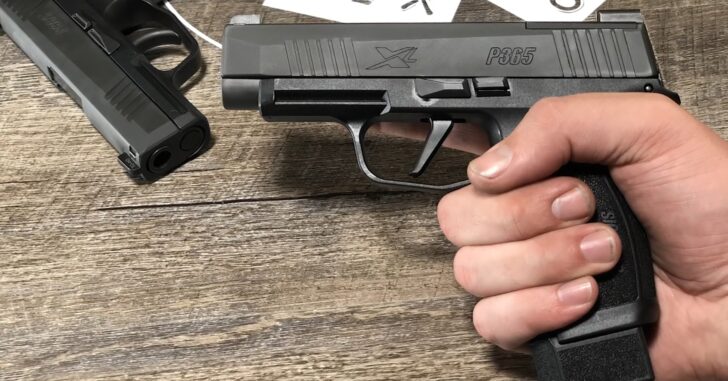 The new P365 XL from Sig Sauer has created quite the buzz with its leaked coverage just months ago to the quick launch that came out of nowhere. While we have a new one in hand we were lucky enough to purchase from Eagle Armory in St Louis, it’s not even listed on SIG’s website to date.

The XL in simple form is a P365 with an extended grip length with an extended slide. It’s much more than that as we take a closer look. The slide is optics ready cut for the unreleased Romeo Zero, which was leaked about a day after the firearm.  While it removes your rear sight, the Romeo Zero appears to have a build in rear sight, according to the leaked photo from Osage County Guns (LINK: https://www.osagecountyguns.com/blog/news/sig-sauer/new-sig-sauer-p365-xl/ ). One of the highly anticipated questions was will the 365XL slide fit on the 365 frame, the answer is yes! They also extended the recoil spring and guide rod to the full length, unlike the Glock 48. Big win there for Sig Sauer.

You’ll have a larger beavertail to combat slide bite, a new flat trigger that breaks at 90 degrees, and a beveled mag well for those speedy reloads. This firearm was made for concealed carry and gunfighting!

Most of your open bottom holsters will already fit the XL as the body pocket maintains most of the same lines.

These mags have very stiff springs from the factory so I would recommend a speed loader like the Maglula double stack speed loader. I would also advise loading and unloading them about 10-15 times prior to carrying. We did experience a few fail to feed issues with a couple of the magazines as we got started. Some of that may have also been caused by the ammunition we were using initially which was Magtech 124 grain. Every magazine ran flawlessly after getting the initial full cycle out of the way.

While the XL isn’t a massive improvement outside of the grip length, I definitely love this handgun and recommend it over the 365.

Be sure to watch your local shops to go check one out yourself!

I’ll be putting together a few more articles with videos on the new P365 XL. Comment below and let us know what you’d like to know about them!

Previous article: In the Hunt - 03 - Management Time Next article: Officers Asked To Leave Starbucks Because A Customer Didn't Feel Safe