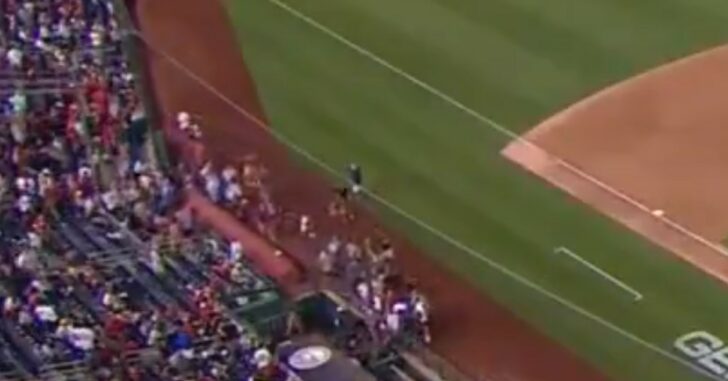 Fernando Tatis Jr. and Manny Machado, superstars on the Padres team, acted in heroic fashion when they feared the worst during last night’s game in DC. Gunshots were heard during the game, which occurred outside during a drive-by shooting, but everyone inside the stadium had no idea where the shots were coming from. The Nationals Stadium went into lockdown, with the announcer asking fans to stay put and not to leave the stadium.

People joke that he is a super hero… Well… HE’S A REAL SUPER HERO. Seriously unreal. This is Manny and Niños first reaction. THE FACE OF BASEBALL. Thank God he’s ours. pic.twitter.com/P69ovy4SzY

Just ended up in the Padres dugout bc of shooting. Thank you Manny Machado and @Padres pic.twitter.com/B2GaJ7Wt6V

The scariest part of the shooting at Nationals Park was the unknown. What do you do in the fog of uncertainty? People raced toward us in our seats on the 3B line shouting “Shooter!” Hiding under our seats, my 12-year-old son said, “I don’t want to die. I’m too young to die.”

Police say that two vehicles were shooting at each other just outside the stadium. The shots, heard inside as well, caused immediate panic among fans and players alike. While it wasn’t an active shooter event, I’m sure it felt like one to those in attendance.

It always brings me back to carrying in restricted areas, if still legal to do so. If you’re attending a sporting event, however, you’re likely to go through security that would include a metal detector. Taking your firearm along for the ride usually isn’t in the cards, but there are other ways (laws permitting, of course) to at least have something on your person in case you’re face-to-face with a deadly challenge.

In a stadium with thousands of people, during an actual active shooter event, you’re probably more likely to be injured during the ensuing chaos with everyone trying to rush to safety. Anytime you enter a building, whether it’s a stadium or restaurant, it’s advised to pay attention to the layout and exits, as well as places where a bad person could come from.

It’s all a part of staying safe, but last night’s events were surly an eye-opener for thousands.

Previous article: Man Fires Gun And Drives Truck Into Bar After Being Kicked Out, Customers Stop Him Before More Damage Is Done Next article: Robber Says He Has A Gun, Really Has A Slim Jim, Still Successful With Robbery