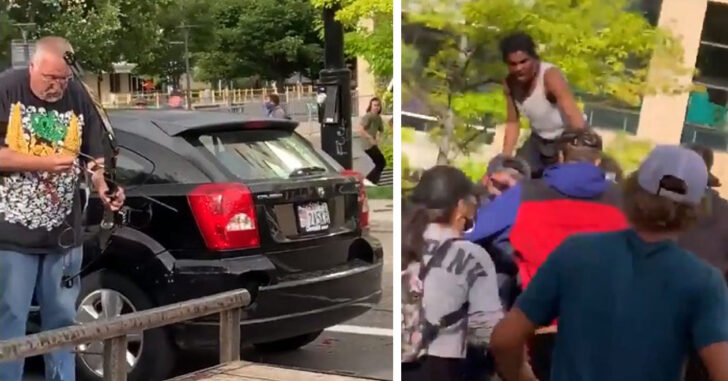 If you haven’t seen it all yet with these riots, maybe now you have.

Video surfaced a few hours ago that shows a man in Salt Lake City, Utah standing next to his car with a bow and arrow. Apparently, members of a mob were hitting his car, and he wasn’t having it.

He seems to fire the arrow when a man charges at him, and that’s when the crowd went crazy with one man yelling “Fuck him up! Fuck him up!”

Local media reported on the incident:

The man left his vehicle in the middle of the intersection near 200 South and 400 East – in eyesight of where the first vehicle was reported to be burned. The man allegedly was going to use the bow and arrow on protesters, according to witnesses. In response, people at the protest tackled the man and attacked him. That same group looted his vehicle and flipped it, according to 2News reporter Kelly Vaughen. The vehicle then caught fire in the streets.

BREAKING: Downtown Salt Lake City, A man got out of his car with a bow and arrow. Demonstrators attacked him, and flipped his car. It is now burning as police try to break up the scene. @KUTV2News pic.twitter.com/AI5zkq0p2w

There are numerous points here:

We’ll be keeping an eye on any additional information regarding this incident, and we have no idea what happened to the man with the bow & arrow, other than reports that he was escorted away by police and his face was bloodied.