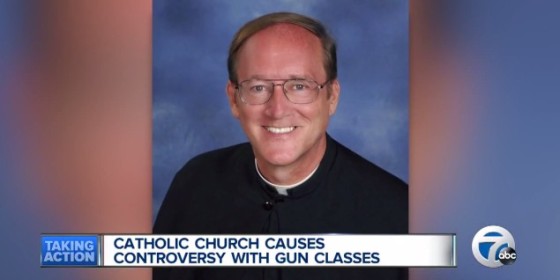 The Rev. Edward Fride of Christ the King Roman Catholic church in Ann Arbor, MI has sent a letter to his parishoners, encouraging them to arm themselves for their own defense. The Father has also scheduled Concealed Pistol License (CPL) classes at the church. Citing recent crimes in the area, Rev. Fride told his flock that “We’re not in Mayberry any more,” referring to the bucolic small town portrayed in a 1960’s TV series. Father Fride’s comments from the pulpit did not go unnoticed by his superiors.

Fr. Earl Boyea, Bishop of Lansing, issued a statement in which he opposed  guns on Church property and the offering of CPL classes at the church.

“Bishop Boyea has never given permission for anyone to carry a concealed weapon in a church or school of the Diocese of Lansing.

This ban on weapons has now been extended to “open carry” in our churches and our schools, thus making them gun-free zones.

As always we rely on the public or professional security forces to provide for public safety on Church property.”

The issue has caught the attention of local news media, who reported on the controversy just as the Ann Arbor Public School Board has approved a new policy which prohibits firearms on school grounds.

NOTE: As this article was being readied for publication, the Detroit Free Press reported that Fr. Fride will abide by the decision of the Bishop and cancel the CPL classes scheduled to take place at his church. Although people in the area will have to find a CPL class elsewhere, the sequence of events has focused attention on crime and the options available to law abiding citizens with respect to concealed carry in Michigan. Stay safe.

Previous article: Negligent Discharges: Are They Inevitable? Next article: Woman Negligently Shoots Herself After Hot Brass Goes Down Her Shirt