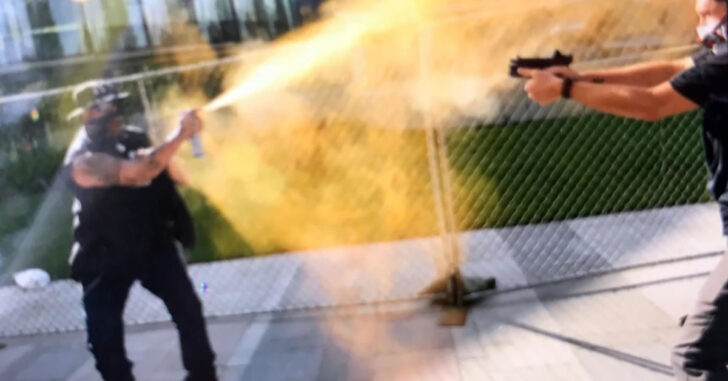 DENVER, COLORADO — An armed man was captured on video shooting and killing a man who had just sprayed him with mace during a protest.

Two opposing groups were at the location, and reports suggest that things were getting heated between a few of the people there.

The incident occurred after a man participating in what was billed a “Patriot Rally” sprayed mace at another man. That man then shot the other individual with a handgun near the courtyard outside the Denver Art Museum, according to a Denver Post journalist who witnessed the incident.

In a news conference after the incident, division Chief Joe Montoya, said police could not confirm the shooter’s or the victim’s affiliations, but said the incident started as a verbal altercation. Two guns were found at the scene, he said, as well as a mace can.

Police were already on the scene and were able to respond in seconds. Video from the street shows the shot being fired, as well as the spray of mace towards the man who pulled the trigger.

Two guns were found at the scene, but it was not immediately clear who the other belonged to.

A photo (above) was taken by a reporter and clearly shows the armed man with his handgun extended out, the slide back slightly, likely indicating that the photo was taken in the split second after the gun was fired.

Police later tweeted that the suspect is a private security guard, and that he has no affiliation with Antifa.

Update: Further investigation has determined the suspect is a private security guard with no affiliation with Antifa. Additional information will be released as it becomes available.

A photo of the man who fired the shot shows officers pointing guns at him and telling him to get on the ground. His handgun can be seen laying on the ground next to him.

Being armed and actively getting into a confrontation with someone, let alone at a protest, is something that legally armed citizens should be avoiding at all costs. There is no word yet if this armed man was lawfully carrying, or if the man who was shot was also armed with more than just the mace.

A zoomed-in shot of the above photo actually shows the brass being ejected from the handgun, an almost impossible photo to achieve.

Previous article: Man Saves Girlfriend And Roommate From Armed Intruder With Quick Thinking And Precision Shots Next article: Exude Illuminator Light from Umarex: Precision Spotlight That Directs Light Where You Want It