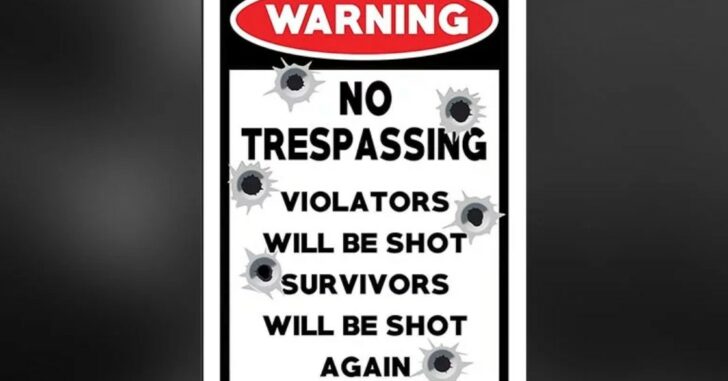 On Tuesday, St. Paul police were in pursuit of a car thief when he crashed his car and took off on foot. Cops then heard the sound of gunfire and found the thief lying wounded in Vincent Trotter’s yard.

As the Pioneer Press reports,

Police discovered a man with gunshot injuries in a yard on Cook Avenue, off Payne Avenue — about two blocks from the crash. He was identified as the driver of the stolen car, Jalik Combs.

Trotter told police that he owned the home and gave them his gun. Combs was apparently not armed.

Oh, and there’s this:

A sign in the front window of Trotter’s residence says, “Warning” and “No trespassing.” It goes on state, “Violators will be shot. Survivors will be shot again!”

The car thief’s mother was interviewed.

(Artesa) Wheatley said she talked to her son by phone and he told her the man asked him, “Did you see the sign that said ‘No trespassing’?” and told him to get away from his house.

Combs told Trotter he was leaving and started to, but he was shot, according to Wheatley. …

Combs was treated at Regions Hospital before being booked into the Ramsey County jail Tuesday on suspicion of auto theft. He was shot in the buttocks, forearm and legs, according to his mother, Artesa Wheatley, who lives on the same block and said she doesn’t know Trotter.

Police brought Trotter, the homeowner, in for questioning and eventually charged him with second degree assault with a deadly weapon.

Trotter had been involved in a shooting in 2013 when he was the victim of an armed robbery. He was not charged in connection with that incident.

The sign in Trotter’s window probably didn’t affect the decision to charge him as much as the fact that Combs wasn’t armed. But it couldn’t have helped. And it will no doubt be used against him by prosecutors when he’s tried.

Previous article: How To Prepare For A Red Flag Order At Your House Next article: Man Negligently Shoots Himself in the Penis With a Hi-Point, Because Of Course He Does