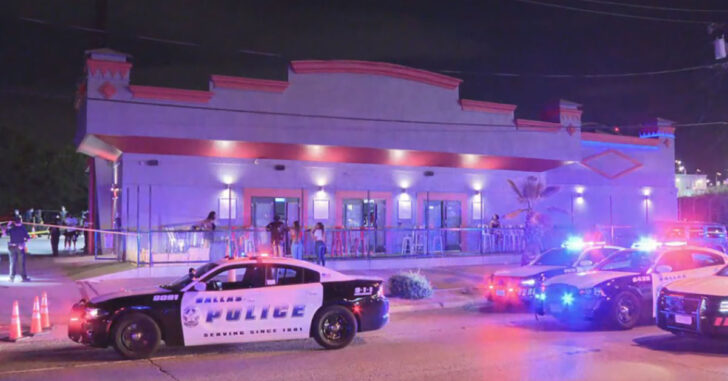 DALLAS, TEXAS — Police say a man opened fire outside of a bar after he and his party were denied entry due to the venue being at capacity, as a result of complying with current covid restrictions.

In all, three men were shot, and a woman was hit by shrapnel.

“And so they pushed him out of the restaurant and locked the doors and he went into his car and he just started spraying the place,” Micaela Dartson recalled.

She was inside as the bullets were flying, fearing for her life.

“There’s gunfire and glass flying everywhere and we all hit the floor,” she said. “You can tell it was an assault rifle. I mean, there was so many shots, it was unbelievable.”

One of the men, not allowed in, apparently went to a vehicle and retrieved a rifle, according to police.

After shooting into the bar, the man went around to the back of the bar, where he was met by armed patrons. A gunfight ensued between them, and the man took off.

It wasn’t clear how many armed patrons confronted the suspect, but it doesn’t sound like they hit him while they fired in an effort to stop him. It DOES, however, sound like they acted as a successful deterrent. He could have very well planned to fire more shots, and may have been trying to get into the building from a rear entrance.

Hopefully police will be able to locate this dangerous suspect, and good on the armed patrons for standing their ground and protecting countless lives.

Previous article: 17-Year-Old Girl Shot And Killed After Fight Breaks Out In Hollywood During Illegal Street Car Race *WARNING: GRAPHIC* Next article: Terrifying Attack Caught On Camera Has Every Gun Owner Wishing Someone Was Armed