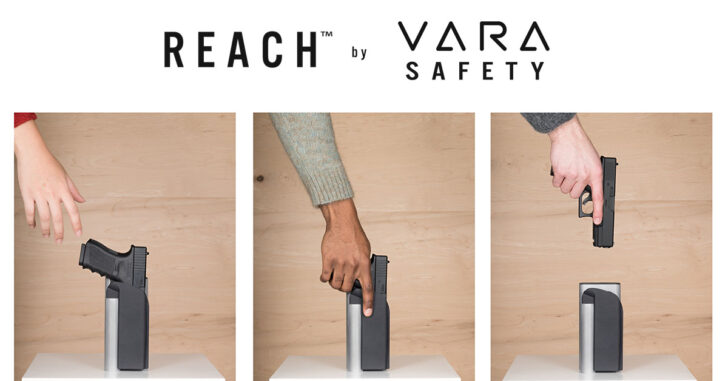 Back in January of 2018, I received a Facebook message from a friend back in New York about a startup that was developing a new product in the gun space. He immediately thought of myself and Concealed Nation, because it’s right up our alley.

The circumstances surrounding the future encounter were rare to say the least, as he had been introduced to the new product by a neighbor, who also happened to be part owner of the company.

“Fingerprint gun safe? It’s been done before.” That was my immediate response. Moving on.

In March, I flew up to New York so that I could meet with Timothy Oh, the founder of the company and the brains behind the product and it’s technology.

Timothy is a firearms enthusiast and grew up around firearms his whole life.

Timothy demoed the Vara Safety Reach in my hotel room, and was quick to inform me that it’s still in development and that this was not the final product. It didn’t even matter. I was immediately thrilled with the concept.

I sent off a text and picture of the prototype to Dan Zimmerman over at The Truth About Guns and told Timmy that he’d love it. I wasn’t aware that Timmy and Dan had already talked about the product, and he was just as intrigued as I was.

Timothy’s company had secured $1 Million in funding at the time and had won numerous tech competitions. As a result, things kept moving forward with development (and excitement).

EXCLUSIVE: WIN A Vara Safety Reach & $500 Towards A Firearm

Fast-forward to SHOT Show 2019, where Christine Tate was present at their booth so that they could showcase their product to the world (You’ll learn more about her below).

It was an absolute hit.

But what exactly is it? What is the Vara Safety Reach?

In a nutshell, it’s a safe and it’s a holster. It allow your firearm to be secured, while giving the user access in less than half a second.

The Vara Safety Reach uses inserts based on the firearm you are looking to secure. Think of the inserts as the kydex portion of your holster; the part that’s molded for your firearm.

With everything securely mounted on your bedside dresser, vehicle or office, it simply takes a thumb print scan to grab and go. The pad, seen above, is in the position of where your thumb will naturally gravitate to when going for your firearm. With the technology used, the quick scan approves or denies the attempt to gain access based on the thumbprints that are already stored inside the unit.

Here’s a quick video that shows what the Vara Safety Reach is all about:

The People Behind The Product

Timothy Oh is the founder of Vara Safety, and being in the firearms industry came as no surprise to me after hearing about his history.

“I grew up with guns, learning firearm safety at a young age and was trained by my uncle who is a police officer the Los Angeles Police Department,” Timothy told Concealed Nation.

“When I was 17, I won an idea competition at my engineering college with a firearm safety device. That idea was then posted on AR15.com where it went viral… in a really bad way, getting completely decimated by the forum.” Instead of taking a hit and being down for the count, Timothy chose a different route. He continues, “So I ditched that idea and conducted research at the Los Angeles Police Department that summer, where I learned to shut up, listen, and come up with a better solution.”

The part that intrigued me was how open Timothy was to others’ feedback during his efforts to make the best product that he could.

“The driving forces after that became continual feedback from gun owners, with me going out and directly meeting over 1500 people from military, law enforcement and civilian backgrounds. Over the last few years, I took every single prototype and put it in front of gun owners (even when I got pulled over for speeding, I demo’d my prototype to the officer on the side of the highway). The support of the gun community in giving feedback is what helped make Vara Safety into a successful startup,” said Timothy.

Next up to bat is Christine Tate, who had a chance encounter with Timothy during a competition that he was involved with, of which she was a judge. Out of 2,200 teams competing for a $100k prize, Timothy easily took home the gold.

Christine shared her experience with Concealed Nation, saying “I was one of the entrepreneurs in residence at RPI that judged his very first idea of a barrel lock. We decided he was one of the winners alongside 9 other teams.”

During that competition, Timothy took some advice and put together the best pitch he could for the final competition. He completely changed the product based on all the advice and comments received. It was this drive and determination, along with a loved product, that kick-started things.

“Then he killed it on stage – blew everyone away. I am a longtime judge of this event – his was the very first time there has really been no discussion among the judges on who won the day –  all pretty much agreed it was Timmy and his gun safe. He won the $100k out of 2200 teams (Spring 2016)!  I went up to him after and said ‘lets really do this’ and have been working with him ever since.”

Christine is also a life-long firearms enthusiast and has her concealed carry permit in New York State.

Let’s get back to the product, and this is where the Vara Safety Reach really stands out from the crowd.

Your thumb naturally aligns onto the fingerprint sensor when you grab your gun. Industry-leading biometric technology ensures reliable access.

And it’s not just the scan that’s done in half a second. That half second includes the scanning of your print and the unlocking of your firearm. You’d be hard-pressed to find a bio-metric outside of your phone that can do things this quickly, let alone a safe.

And as it’s essentially a holster for your gun, the trigger is guarded at all times.

To power the device, it utilizes power via an outlet. If the power is out, a back-up battery keeps the thumb print working. If all else fails, a key will give you access to your firearm.

EXCLUSIVE: WIN A Vara Safety Reach & $500 Towards A Firearm

I’ve seen a lot in this space over the years, and this has to be one of the most exciting products I’ve had the pleasure to demo. With all of the exciting buzz that was generated from SHOT Show, it’s going to be an interesting and exciting year for this start-up. I see bright things in the future, and believe that every gun owner should have one of these as a part of their safe storage options.