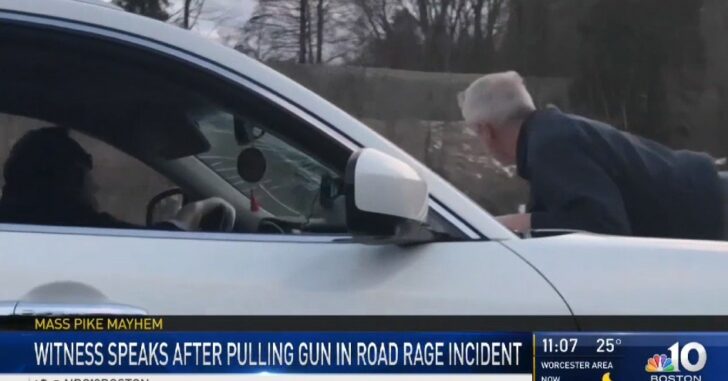 A road rage incident on the Massachusetts turnpike turned potentially deadly when one of the men involved in the incident, ended up on the hood of the other car while it traveled down the highway.

Authorities say the man on the SUV’s hood, 65-year-old Richard Kamrowski, had gotten into a minor side-swipe crash with the SUV, and that he confronted the SUV driver, identified as 37-year-old Mark Fitzgerald, on foot during stop-and-go traffic. One thing led to another, and for reasons still under investigation, Kamrowski ended up on the hood of Fitzgerald’s SUV. Court documents show that both men blame the other for the escalation.

Frankie Hernandez, an Army veteran, found himself in a situation where he made the decision to draw his firearm to stop the driver from possibly killing the person on his hood.

In the video of the incident, you can see the vehicle boxed in, and that’s when Hernandez draws on the driver and tells him to get out of the car.

Hernandez held the driver at gunpoint until police arrived, at which time they had guns drawn and ordered Hernandez to drop his gun. He complied, while keeping an eye on his gun to make sure that the driver wasn’t going to jump for it.

“He has the right, he is the law enforcement, so I backed up, and dropped my gun to the side, complied to the order I was given,” Hernandez said. “I just kept my eyes on the driver of the SUV because when I laid my gun to the side, I didn’t want him to rush at me or rush at the gun.”

Whether or not the person on the hood was responsible for any contributing factors, a person who makes the decision to intervene in a situation such as this seems justified. There’s no telling what had occurred to make this event happen, but under the circumstances, it seems that Hernandez made a call that he feels could have saved a life.

If we think about it, there are two forefront scenarios that we could think transpired to cause a person to be on the hood of a car that’s traveling down the highway;

In either case, any bystander would see this situation as a potentially deadly one and while I can’t say if I would have taken the same route as Hernandez did, I do feel that he was in the right with his actions.