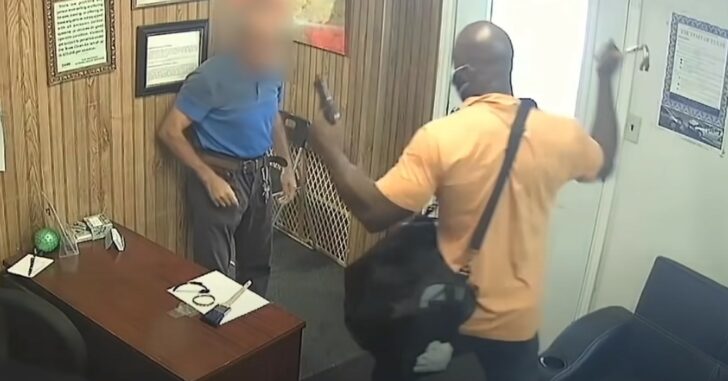 A 68-year-old man was in his office at a car dealership when someone knocked on the door. Thinking that it was a customer, the man opened the door to find a man with a gun who forced his way inside.

The details are outlined below, provided by the Houston Police Department.

On Tuesday, May 4, 2021 at around 11:00 am, a 68 year old complainant was inside his office at an auto sales business, located at the 6700 block of Telephone, in Houston, Texas. The complainant stated that someone knocked on the door after realizing it was locked, so he unlocked it, thinking it was a potential customer. The male then forced his way into the business while armed with a handgun. The complainant then tried to get away from the suspect and run out of the business, but the suspect was able to overpower him and forced him to the ground. During the struggle, the suspect pulled out a crowbar from his bag and began to hit the complainant in the head with it, causing a severe laceration. The suspect then forced the complainant into an office, tied him up, and then dragged him from one office to another. The suspect went rummaged throughout the office looking for money. After the suspect was not able to locate any money in the office, he took the complainants wallet and phone and fled the location, Houston PD #591601​-21

Lessons from this incident:

Know Who You’re About To Encounter
Having a camera at each entrance, that you’re able to monitor when someone is around, can be a very useful tool. I’m not sure if the suspect’s firearm would have been visible, but there is a chance that the victim could have seen that something was off.

If You’re Going To Fight, Fight Like Hell
The victim in this incident made the decision to fight after a failed attempt at fleeing. There was a definite disadvantage for the victim, given the difference in age and physical ability. Granted, this man fought for his life until he couldn’t anymore.

There weren’t many instances, if any, that the victim had to mount an attack based on the video presented. If the victim were armed, the introduction of a weapon may have proven fatal for the victim.