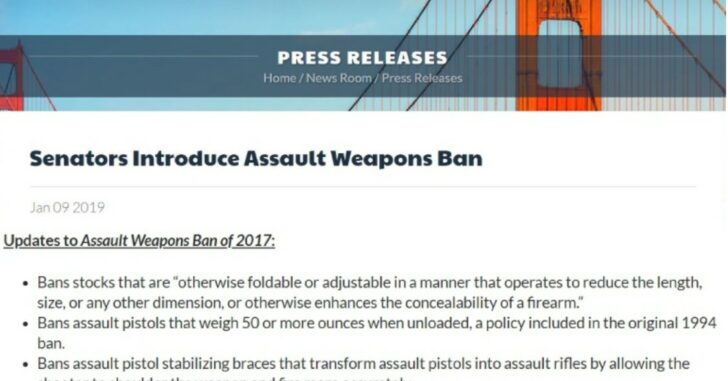 By Jeremy S. via TTAG

Oh boy. Senator Diane Feinstein and her team are up to their old tricks, introducing new Assault Weapons Ban legislation for 2019 that builds on her failed 2017 effort and adds a bunch of new restrictions, regulations, and bans.

If you didn’t care about bump stocks and don’t believe in that “slippery slope” thing, you should care now. Check this out:

• Requires a background check on any future sale, trade or gifting of an assault weapon covered by the bill.
• Requires that grandfathered assault weapons are stored using a secure gun storage or safety device like a trigger lock.
• Prohibits the transfer of high-capacity ammunition magazines.
• Bans bump-fire stocks and other devices that allow semi-automatic weapons to fire at fully automatic rates.

Updates to Assault Weapons Ban of 2017:

• Bans stocks that are “otherwise foldable or adjustable in a manner that operates to reduce the length, size, or any other dimension, or otherwise enhances the concealability of a firearm.”
• Bans assault pistols that weigh 50 or more ounces when unloaded, a policy included in the original 1994 ban.
• Bans assault pistol stabilizing braces that transform assault pistols into assault rifles by allowing the shooter to shoulder the weapon and fire more accurately.
• Bans Thordsen-type grips and stocks that are designed to evade a ban on assault weapons.

Universal background checks, mandatory safe storage, no transfers of existing standard-capacity magazines, no bump stocks, no folding or adjustable stocks, no large-format pistols, no pistol stabilizing braces (they hate disabled persons!), none of grips or stocks designed specifically not to violate the “assault weapons” definitions.

Americans across the nation are asking Congress to reinstate the federal ban on military-style assault weapons and high-capacity magazines. If we’re going to put a stop to mass shootings and protect our children, we need to get these weapons of war off our streets.

This is insane. God forbid a rifle have an adjustable stock so everyone in the family can use it. God forbid a pistol have a stabilizing brace so disabled shooters can use it. You know, firearms should apparently only be usable by able-bodied adults.

And replacing a banned pistol grip with one that isn’t a pistol grip is now “evading” the ban? That’s rich. So which is it? Are pistol grips a problem or aren’t they? Why are you banning pistol grips if replacing one with a “traditional” or otherwise non-pistol grip doesn’t resolve the “problem?”

• The bill exempts by name more than 2,200 guns for hunting, household defense or recreational purposes.
• The bill includes a grandfather clause that exempts all weapons lawfully possessed at the date of enactment.

Funny, I always thought “assault” was a verb, not an adjective.

Call your representatives, donate to or assist gun rights orgs like: