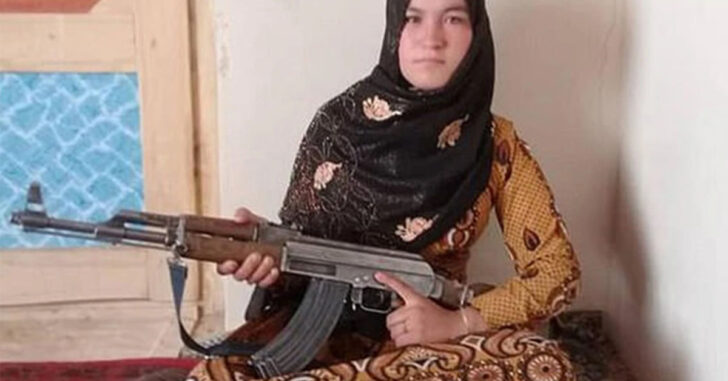 A teenage girl in Afghanistan has become a hero after attacking Taliban fighters after they murdered her parents inside their home. The teen spoke with reporters, and said that she acted the way that she did in order to save her brother and herself, and because they had killed her parents.

The girl, Qamar Gul, has been invited to the presidential palace.

The attack on her parents was focused on her father, who was a vocal supporter of the government and head of the village council of elders, which made him a target for the attack.

The terrorists forced their way into the home, and Gul recounts what happened that night.

“It was around 1 a.m. that the Taliban knocked on our door. My mother answered and refused to open the door. They broke our door and dragged my parents into the hallway and killed them both,” she told CBS News.

Gul says she immediately grabbed her father’s AK-47, a gun which he taught her how to use. She opened fire, killing two terrorists and injuring another.

“I am proud I killed my parents’ murderers,” she told the AFP news agency in a separate interview. “I killed them because they killed my parents, and also because I knew they would come for me and my little brother.”

“After I killed the two Taliban, I went to talk to my parents, but they were not breathing,” she told AFP. “I feel sad I could not talk to them one last time.”

I cannot imagine being in a situation like this, and it’s one of the things that we often take for granted here in the US. This teen acted with such bravery in the face of terrible individuals, and prevailed.

Her safety is on my mind, like many others, and I hope that she’s protected if any retaliation were to be planned.

“My life and my family’s life is in danger. I want the government to protect our people and us, so we can live in peace,” she said.

Previous article: *WARNING: GRAPHIC* Man On Parole Executes 3 People In Detroit, 2 For No Reason And 1 For His Car Next article: Transaction Gone South: Robber Pulls Knife On Man, Man Pulls Gun On Robber