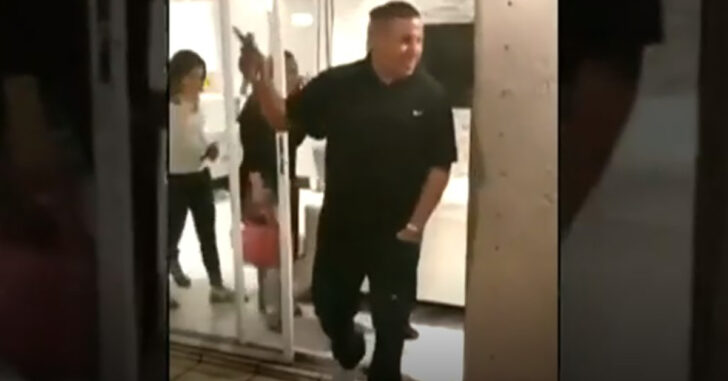 MIAMI, FLORIDA — In a truly bizarre and unfortunate incident, a father at a family holiday party had just arrived to enjoy the festivities, and would collapse in front of everyone just a few moments after sitting down.

As he sat in a chair at the table outside, 40-year-old Yemil Arguelles collapsed to the ground and was grabbing his upper body.

At first, everyone thought it was some kind of joke, but then quickly realized that something was terribly wrong.

The incident was caught on camera, which can be viewed here.

Arguelles was shot in the chest. He later died at the hospital.

“It’s possible that it came from beyond the buildings,” said Detective Zubair Kahn of the Miami Dade Police Department. “It could be somebody cleaning their gun and accidentally discharged or somebody could have been shooting up in the air.”

Police say they’re certain that the bullet did not come from anyone at the party.

If this were a case of negligent discharge, the person responsible is most likely aware of the outcome they created, whether it be the police in the area after the incident or seeing a news report. If that’s the case, this individual needs to do the right thing and let police know what happened.

If it was a case of ‘celebratory gunfire’ into the air, I’ll refer back to the previous paragraph. If you’re going to do something stupid, you need to hold yourself accountable, especially if someone lost their life because of your poor choices.

There are a few other things that could have happened, but we could be here for half the day with possibilities. In the end, it’s a very rare thing to have happened, and the 4 Rules of Firearm Safety will always keep people safe if they just… follow them.

Previous article: GLOCK 43X With 10 Round Capacity? It May Be Coming Next Month Next article: GRAPHIC: Man Decides To Test His Steel Toed Boots With A .45