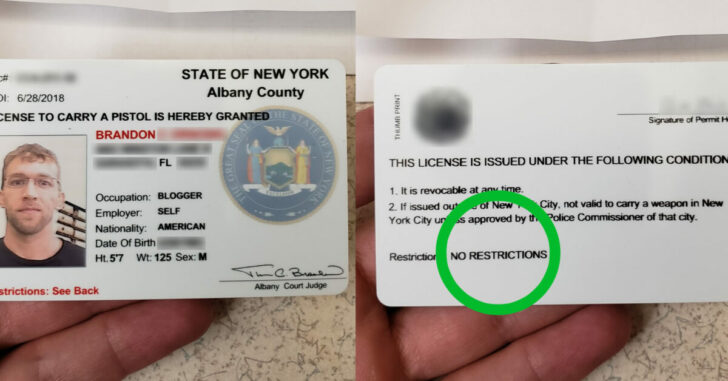 Ever since New York State became a shall-issue state overnight after a Supreme Court decision, things have been up in the air as to what the future of the State actually looks like. We know that new gun control measures were put in place almost immediately, of which take effect September 1st.

New York is a funny state where each issuing authority can place restrictions on concealed carry permits. Most of these restrictions come in the form of a stamp, or even handwritten, that’s placed on your permit and says ‘Hunting & Target Only’. What that means is that, according to the issuing authority, you may only carry your firearm concealed while doing those things, and to/from those things.

However, the permit itself is to carry a concealed firearm in the State of New York, and what many don’t know is that those restrictions are administrative. That means they hold no weight of the law and if you were found to be carrying a concealed handgun while having those restrictions on your permit, there isn’t much they can do. You won’t be arrested, your gun won’t be taken away, however if your judge were to find out what you did then you run the chance of your permit being revoked.

Fast-forward to the shall-issue days of today, and we’re in new territory.

More importantly, for those who have restrictions placed on their current permits, a judge would usually want that person to explain to them why the restrictions should be removed. In other words, they want ‘proper cause’ to justify their removing of the restrictions.

Do you see where I’m going with this?

The best thing to do would be for each county, who places restrictions, to simply remove restrictions from all permits. That’s not likely to happen, however, and a letter to the judge is usually the step to take in the removal process.

How To Get The Restrictions Removed From Your Permit

While every judge is different, they should be following the same line after this Supreme Court decision. To get your restrictions removed from your New York State Concealed Carry Permit, do the following steps:

With these steps, you should now be able to secure that previously elusive unrestricted NYS concealed carry permit.

If you’ve been successful, drop a comment below with your results.