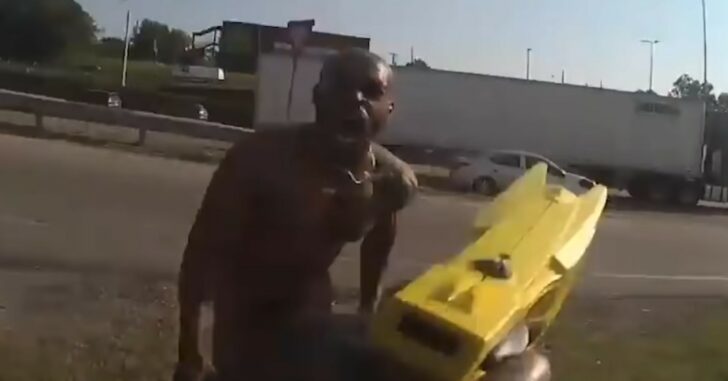 You have to give police a lot of credit for the things that they have to deal with while on duty, and the officer in this video showed some great restraint, as well as using a non-lethal method in an attempt to stop his attacker before firing shots.

The biggest takeaways from this video, for the armed citizen crowd, are the following:

When trying to stop a threat, no one wants to shoot and kill the aggressor. The idea is to stop the threat, and sometimes a non-lethal method will work to do that. But when it’s not enough, such as in this case, another method such as a firearm is necessary to protect oneself.

Just because your shots hit their mark does not mean that the threat has stopped. Adrenaline is a powerful thing and can keep a person charging forward right through your bullets. It’s important to continue until the threat is stopped and in the meantime…

The officer in this video is constantly moving away from the threat, trying to maintain distance between them. It’s a difficult thing to do under the circumstances, but he’s able to maintain somewhat of a decent distance from him until the end.

Distance is always your friend in any self-defense scenario. As John said in the video, Stand Your Ground does not mean standing in place while a threat is coming towards you.

Keep that distance, keep your head on your shoulders, and do what is necessary to survive the encounter.

Previous article: When You Break The Bystander Effect | Active Self Protection Next article: Store Employee In NY Opens Fire On Armed Robber; Not Everyone In The State Is Defenseless