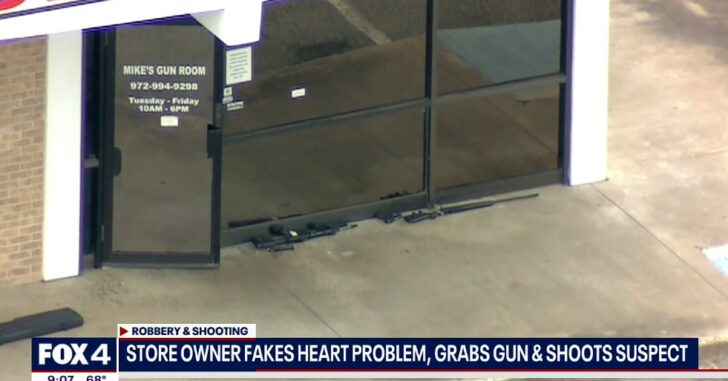 RICHARDSON, TEXAS — A 77-year-old gun shop owner, being in business for decades, had his first encounter with armed robbers on Thursday. It’s a scenario that he says he’s played out in his head over the years, and he had a plan of action if the time ever came.

Multiple men, wearing masks and armed, came into the store and at first pretended to be regular customers. The owner, Mike Brown, knew something was off as the encounter progressed.

Brown told reporters that the men held guns to the back of his head, and ended up grabbing around 50 guns and placing them inside bags. Brown then turned the tables with some deception.

He faked having a heart condition, in order to buy him a little time so that he could get an advantage.

“I’ve got a heart medication and I’ve got to get to my pills,” he said.

By the time Brown got his gun, all but one suspect had left, and the last one was on his way out the door.

Brown fired, striking the suspect in the shoulder. That suspect was apprehended by police when they arrived to the scene.

It seems that Brown didn’t have a firearm on his person, and he needed to move to a different location in order to be armed. That can cause problems, and if these suspects had been killers, it could have turned out much worse for Brown. The fact that he was able to get his gun only after the threats were leaving is a sign that he should take a look at his firearm placement, allowing for a quicker response if it were to happen again.

And if the threat is leaving, let them leave. The window of opportunity has already passed when the suspects were actual threats to your life. One could argue that it’s an attempt to stop them from getting away with the firearms, but you’re putting your life in danger by doing so, and you’d have to get all three with some pretty nice marksmanship.

I’m not saying that it’s impossible, but it’s important to weigh the pros and cons. You only get one life.