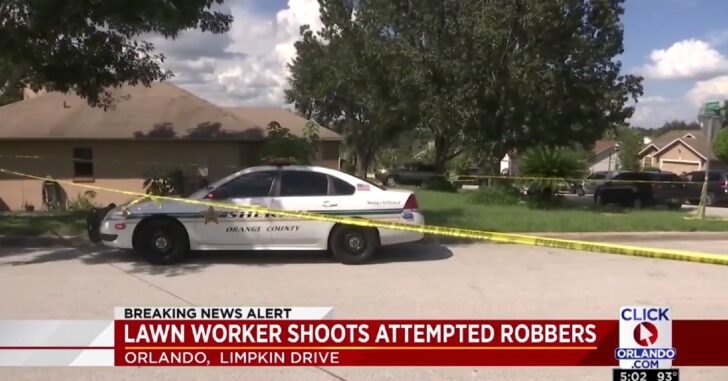 ORLANDO, FL — When three thugs came up on a man tending to a lawn in Orlando, Florida, they likely thought that they were in for an easy score.

They were dead wrong.

The victim was tending to a lawn on Limpkin Drive around 12:14 p.m. when a red vehicle pulled up and three men got out, a news release said.

Deputies said two of the men displayed handguns as they tried to rob the victim. The victim was also armed, so he pulled out his gun and shot at the attempted robbers, according to authorities.

The victim said he believes he shot one of the men.

Neighbors told News 6 that the lawn care worker is well-known in the area and well-respected.

“I walked out after having a little lunch, and to see this is pretty crazy,” said neighbor Shay Davis, who is also a firearms instructor. “He was an armed citizen and he was able to defend himself and get the bad guys and handle himself. So that’s a good thing I take away from it.”

Two of the would-be robbers fled in the red vehicle and the third ran between homes on the north end of Limpkin Drive.

“No injured suspect has been located at this time. The investigation is active and ongoing,” an Orange County Sheriff’s Office spokeswoman said.

It’s impressive to see an armed citizen prove to be a match against a thug, anytime — sending three baddies packing is all the more awesome.

It’s also important to remember: so long as the law permits you, always, always, always be packing. You never know when your day will go from normal to life-changing.

Previous article: Armed Intruder Walks In, Shot By Homeowner, Then Runs To Neighboring Homes For Help Next article: Watch: 4 Drums, 2 Guns, All Awesome