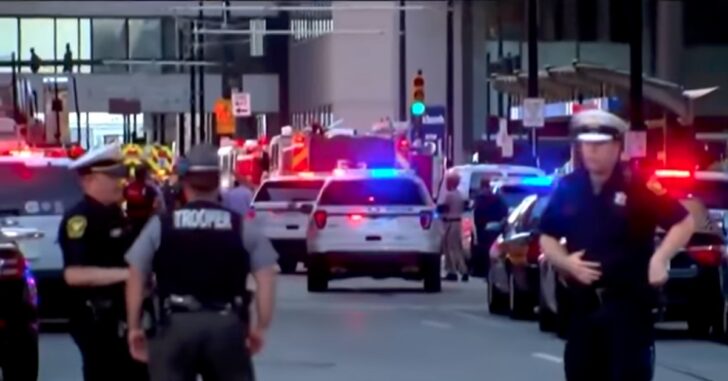 CINCINNATI, OH — A man is dead after engaging in a shooting rampage in Cincinatti’s Fountain Square, CNN reports. At least three people are dead, two more are injured, along with the suspect.

The shooting didn’t last long, but that didn’t stop the gunman from destroying dozens of lives.

At least three people were killed in a shooting Thursday at the Fifth Third Center in Cincinnati’s Fountain Square, Cincinnati police Chief Eliot Isaac said. The suspect is also dead, Isaac said. Two others were injured, he said.

Police finished securing the building just before 11 a.m. ET, the chief said. The shooting began shortly after 9 a.m. The gunman entered a loading dock and opened fire before going into the lobby of the building, where three or four police officers engaged him, and gunfire was exchanged, Isaac said.

Although this is a near-unbelievable tragedy, Cincinnati citizens are extremely fortunate that this spree killing was limited so aggressively by local law enforcement.

Governor John Kasich responded on Twitter to the tragedy this morning:

“There was a senseless act of gun violence on the streets of Cincinnati this morning. I’ve spoken with the Mayor and informed him the state will provide any necessary resources to the local police. I commend the law enforcement, fire and EMS personnel who swiftly responded to the scene and share my deepest sympathies with the innocent victims of this violent attack.”

This is where we’ve been put as a nation, and as responsibly-armed citizens. This isn’t normal behavior. This isn’t something that guns have wrought. This is a crisis plaguing the American people because of the collective failure of our communities to address mental health issues rife in our nation.

Often you will hear the maxim “Guns don’t kill people; people kill people,” and that’s absolutely correct. However, action has to be taken to address the kinds of people that could carry out an act like this.

We all depend on it.

Previous article: Layover In Washington DC; Concern About Checked Pistol Next article: Man Fires At Ghost After It Broke Into His Home