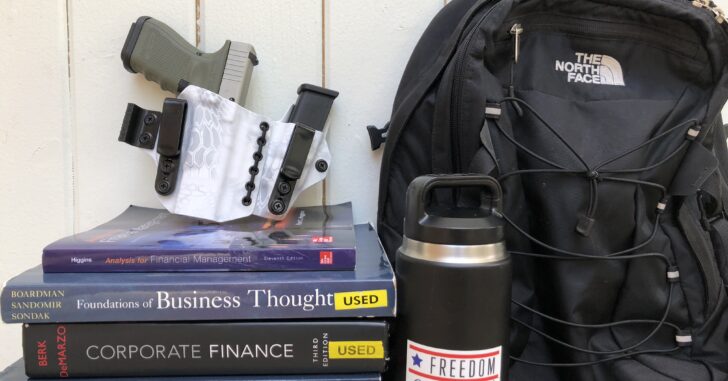 Last semester, I overheard a conversation some of my classmates were having. A guy mentioned that the students at our university are allowed to carry concealed guns on campus. The two girls he was talking to immediately got upset. They started making comments about how it made them feel unsafe and that they would not want to be around anyone who was carrying a gun. They had no idea that the girl sitting next to them had a M&P Shield under her sweater.

I started carrying on campus last November, immediately after receiving my provisional concealed carry permit. In fact, the first place I carried was at school. While it is legal to concealed carry on the campus of a public university in the state of Utah, I was hesitant to do so. I know that college campuses are not the most accepting of conservative leaning views on anything, especially with something like firearms. The conversation I overheard is just one example of that. My university even had a “cry closet” in the library during finals week last semester.

This was my first time carrying in another state and my first time trying out my NeoMag Even though the Utah provisional permit is not recognized in all of the states that recognize the standard permit, I’m glad that Nevada recognizes the provisional Carrying the M&P Shield in the CrossBreed Modular Belly Band • • • #concealedcarry #ccw #edc #girlswhocarry #girlswhoshoot #guns #gungirl #smithandwesson #mpshield #9mm #crossbreedholsters #bellyband #neomag #2a

Despite all of that, I have been pleasantly surprised with the support I have received from some of my professors. Back in October, a student from my university was murdered near campus. Once classes resumed, my writing professor talked with my class about campus carry. I was so surprised when she said she supported it. I talked with her after class and told her it was something I had been thinking about, and she was very encouraging. My sports sociology professor also supported the second amendment. I wrote one of my papers on being part of the gun community, and he absolutely loved it. He left some really great comments on my paper, and we exchanged comments about our favorite ranges in the area. However, I know that most professors do not feel the same as the two that I have described. Because of that, I need to be careful with how I express my views when at school.

In my first year of college, I have realized that I am not having the typical college experience. I don’t live in the dorms, I don’t drink or go to parties, I don’t have a ton of friends, and carrying a gun every day is just another part of it. Carrying a gun every day has also changed the way I get ready for school. I can’t just throw on a random outfit in the morning like most college students do. I have to plan what I’m wearing ahead of time and make sure it conceals my gun in an effective way. Surprisingly, I have only been late to class once so far.

I’ve been loving strapless tops this summer, and this one is great for concealing Carrying the M&P Shield in a custom Multi Holsters appendix holster with an Ulticlip • • • #concealedcarry #ccw #edc #girlswhocarry #girlswhoshoot #guns #gungirl #smithandwesson #mpshield #9mm #multiholsters #ulticlip #2a

I think it is extremely important to carry on campus, especially for female students like myself. The reality is that college campuses are not perfectly safe for students, and they never will be. While I have not had any encounters at school where I have felt as if I needed my gun, I know that college students are potential targets and I have chosen to always be prepared. One of the biggest reasons why I choose to carry on campus is simply because I can.

As of now, only 10 states allow individuals to legally carry guns on college campuses. I definitely realize how lucky I am to go to college in one of those states. I am a 19 year old female who weighs 120lbs and is going to college 800 miles away from home. Carrying a gun while at school not only gives me peace of mind, but it also gives my parents peace of mind knowing that I have the tools to defend myself.