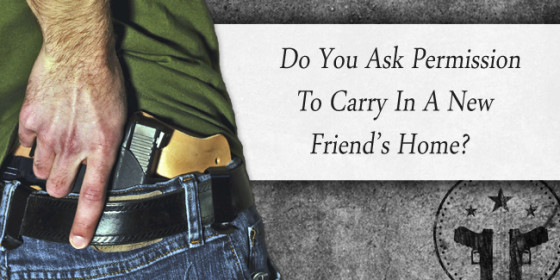 I tend to write articles around questions that I get on the Facebook page often, and this is one of those questions. I figure, for every person who asks, another 20 are wondering the same thing.

You are invited over to a new friend’s house for dinner for the first time. Let’s say that you and your significant other are invited and you aren’t quite sure of the host’s personal thoughts and feelings on concealed carry. Many will say “It’s concealed for a reason, keep your mouth shut and carry anyway.”

But, put yourself in the homeowner’s shoes. It is after all, their home. In some states, it is actually illegal to enter a home with your firearm if the homeowner doesn’t want you to.

So, do you ask permission to carry inside their home?

I find that many people ponder this question without getting feedback from anyone else. Me personally? Well, I guess it depends on the situation and the people whom I am visiting. Anyone close to me knows that I carry anyway, so that’s never an issue. But for a person that I don’t know very well, I would be inclined to ask them how they feel about it ahead of time.

Think about this way: What if they have a rowdy child or dog? It wouldn’t be the first time I’ve had a dog jump up on me and try to play. It also wouldn’t be the first time that children have been rowdy around me. What if your firearm is knocked out of it’s holster due to unexpected roughhousing? Or, what if they simply aren’t comfortable with you bringing a firearm into their home? Remember this isn’t a convenience store, it’s a private residence.

Again, the option always exists (when legal) to simply keep your mouth shut and carry anywhere you happen to go, but it’s still important to respect the wishes of the homeowner.

If it were my home, as a pro-gun person, I would want to know that they practice safe firearm handling and make safety their #1 priority. Not every gun owner does this.

If they say no and you still like them, just invite them to your home for dinner instead.

Previous article: Man Shoots Shotgun In Air To Scare Intruders, Is Arrested, Uses Biden Defense, Charges Dropped Next article: Gun Owner Goes After Robber Once Threat Has Passed, What Would You Have Done?