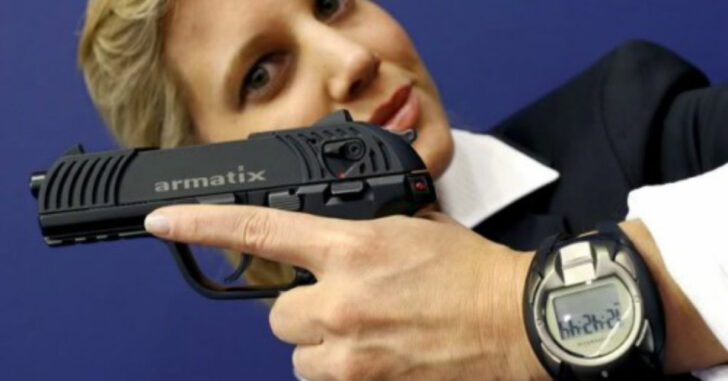 Since its introduction, the Armatix IP1 “smart gun” has gotten oceans of free publicity from hopeful media mavens and gun control advocates, proclaiming the era of personalized firearmsis finally upon us. Armatix’s advent has been the cause of much consternation from the guncontrol crowd, baffled as to why “smart guns” aren’t yet available commercially (click here for an in-depth analysis of that question). Back in April . . .

Armatix announced, once again, that it would be releasing their  IP1 “smart gun” to the market next year. Some time. But for real. This time. We’d tried to plunk down the cash the last time the IP1 was supposedly available, trying to get our hands on one. We wanted to see what it would take to break it, to determine if it was reliable and secure enough to bet your life on should things go bad.

Thanks to an article from WIRED it looks like one security researcher has done the legwork for us. The researcher — who goes by the nom de guerre “Plore” — found a couple of different ways to circumvent all of the so-called smart gun’s “security” features.

Armatix’s claim to fame: the gun will only fire when the correct watch is worn near the firearm. As I predicted to Robert and Dan way back when, a simple frequency generator is all it would take to jam the signal between the watch and the handgun rendering it inoperable.

In other words, your attacker can flip a switch, leaving you completely defenseless for about $30 on eBay (including shipping from China).

If remotely disabling the gun isn’t bad enough, it’s even cheaper to make ut fire without the watch being present.

When the watch isn’t in the vicinity a metallic block moves into place preventing the firing pinfrom moving, thus disabling the firearm. When the watch comes into close proximity to the IP1, a small motor moves that pin out of the way, allowing it to go bang.

It’s a simple solution, but there’s one problem: the firing pin block is made of a magnetic metal. Placing a $15 magnet against the side of the gun is enough to override the block and enable the gun.

A repeater system can enable the gun to function even when the watch isn’t physically located near the handgun. That’s cool and all, but when you can just grab a couple magnets and achieve the same result, why bother with remote electronics?

Can the handgun and its electronics stand up to the jarring of thousands of rounds sent down the pipe? What about water resistance? Will it still function if dropped a couple times or otherwise lightly damaged?

We just don’t know. And given the fact that the New Jersey poison pill law is still very much in place, we’re not likely to get the chance to find out any time soon, no matter what Armatix’s PR flacks say.

I’d love to see a properly functioning, secure, and reliable smart gun. If someone wants to buy one, I say let the market decide (as long as they’re not mandated – anywhere). But until we see verifiable proof of such a product, I’m not going to trust my life to something just because someone calls it a “smart gun.”