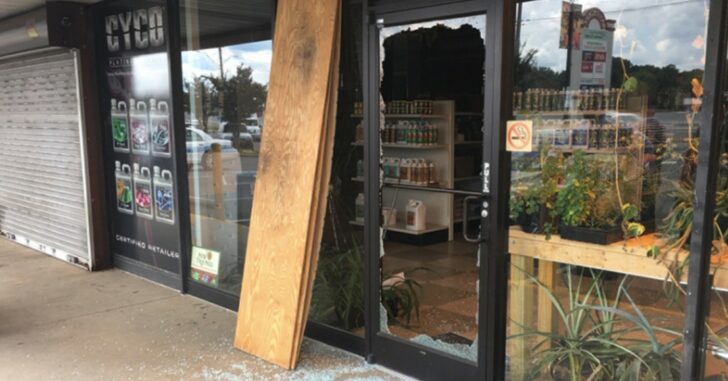 At 4:33 a.m. on Monday, August 6, the owner of a small North Carolina business called American Beauty and Garden Center saw a robber break into his store from a monitor in his home. He called the police to report the intruder. The police also received an alert from an alarm monitoring service.

A few minutes later, the store owner called the police again and told the dispatcher that he had shot an intruder in the store. The suspect, later identified as 20-year-old Justin Anderson, was pronounced dead when the officers arrived on the scene.

According to police, Anderson had smashed through the front glass window to get inside. When the store owner arrived, the burglar ran out of the front door and was shot. He was found by cops behind the building.

Officers haven’t released any information about whether Anderson was armed, where exactly he was shot, or whether the business owner was taken into custody.

CJ Williamson, who owns a business in the same shopping center, expressed mixed feelings about the shooting:

“I never see anything like that around here. It makes me a little scared because I obviously want to protect my business. This is everything I own, this is my life.

“I kind of understand what the business owner down here is going through, but I don’t know if I would have gone through those lengths to protect my business.”

North Carolina has fairly extensive stand your ground protections on the books (see GS 14-51.2 and GS 14-51.3). However, it will be interesting to see how this case will pan out, considering that the business owner knowingly put himself in conflict with the suspect, leaving a place of safety to do so.

Here’s the news segment via WBTV:

Previous article: Submit Your #DIGTHERIG For A Chance To Win Great Prizes From Vedder Holsters Next article: #DIGTHERIG - Andrew and his Brertta PX4 Compact in a JM Custom Kydex Holster