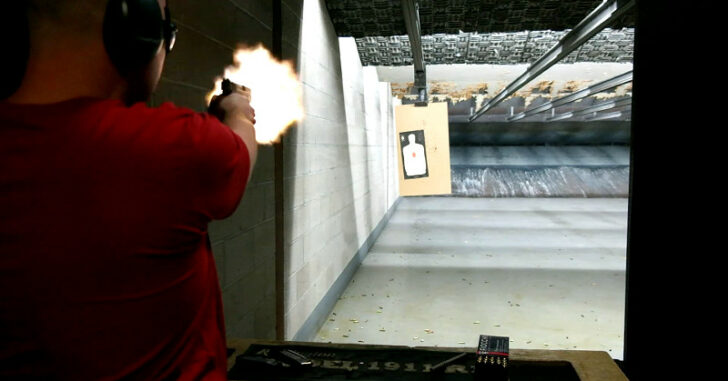 Reviewing a lot of the news articles this week, I ran into a surprising number of concealed carry cases that revolve around the parking lot. Whether it’s a potential robber attempting to stick up a person leaving a shopping plaza or just a confrontation that took place, concealed carriers have a lot to consider when dealing with parking lots.

In this week’s CCW Scenario, we’re going to discuss different ways you can assess a potentially dangerous situation in a parking lot. We’re going to include factors at play, things to look for, and instant red flags.

Not everyone approaching you in a parking lot is a bad guy. Sometimes it’s legitimately someone asking for directions or just a person down on their luck asking for five bucks. Neither of these are necessarily threats. That’s why we spend so much time on situational awareness and trying to maintain the proper mindset when interacting with people we don’t know, in a place that’s potentially vulnerable.

In an empty parking lot, your lone car definitely stands out like a sore thumb. If a stranger approaches you in this situation, you don’t have much in terms of cover or concealment other than your own personal vehicle.

Whenever possible, park closest to the store you’re visiting. Stores tend to have surveillance systems and — even worse for criminals — witnesses. The further out of sight you are (i.e. in the back of the parking lot), the more vulnerable you are to attack.

Whenever walking out in the open, always keep in the back of your mind various places you can go if something sudden or unexpected happens.

A common theme for armed robberies in shopping plazas is when a store closes up for the night. Employees and last minute shoppers are all trickling out one or two at a time. Because the store is closed, there’s no where to retreat to if violence is threatened.

We always think of night time as the right time for criminal pursuits but, in this day, that’s not necessarily the case. Some criminals are dumb and will approach you in broad daylight. That said, the greater the visibility, the greater the chance someone will see a bad guy doing something he shouldn’t be doing.

Walking across a frozen parking lot in February, we all understand that slippery conditions slow us down. We can’t run (effectively or safely), maneuvering is difficult, and escape in short order is way more of an obstacle. Rain, also, provides a great opportunity for bad guys because you may be holding an umbrella. An umbrella in one hand and bags in the next? That’s too easy.

Appearances can be deceiving. That said, if someone wants to advertise that he or she is a gangster or potentially a threat to your well-being, accept it as a gift. However, bad guys come in all shapes and sizes and it’s important to not let the appearance dictate too much. When in doubt, ask a person to stop advancing towards you. Give them a simple command. Their response will likely act as a first taste of what’s to come.

We’ve all seen people hang out in parking lots. There’s the dude waiting for his wife to finish trying on a new dress and then there’s the dude who’s face down in his phone waiting for his girlfriend to get off work. It’s not uncommon to see people hanging out in their vehicles in the parking lot. That said, try to keep aware of who’s waiting and where. Many times, in a robbery situation, the robber will run and make his escape with the aid of a driver. Just having a mental picture of which vehicles are occupied can help reduce down the options if you end up having to give a description to police later on.

Just like the last topic, idling vehicles deserve a bit more scrutiny. A parked vehicle with an occupant inside isn’t instantaneously ready to spring into action. An idling car is.

When approached in the middle of a semi-public place by a third party, numbers matter. A group of two or three is definitely much more imposing than a lone person. Whenever in doubt of another party’s intentions, always ask they stay back. It doesn’t matter if it’s one or more, but whatever they need to say can be done at a distance. If they fail to, you have your immediate response and feel free to switch into a defensive posture.

Tricks Of The Trade

Criminals know that not all their marks are fools. That’s why they sometimes use elaborate ruses to draw you, the outsider, into their personal circle. First, it drops your safeguards that are in place, and second, it moves you closer to them so they can take advantage of that.

False altercation as a lure

Criminals will play off of a person’s sense of social responsibility. Sometimes what you see taking place before you is more nuanced than you give it credit for. For instance, if you see two men in the parking lot getting into a loud verbal disagreement beside your vehicle, pay attention to their verbal and physical cues. IF it appears they’re trying to draw you in by either pointing a finger at you, waving, or otherwise making a scene, avoid this at all costs.

Even if those guys are just having a verbal disagreement, that’s their business. If you feel threatened, call the police. Otherwise, wait and observe from a distance. Pay attention to the other people around you, as well. Watch to see if anyone is observing you while you’re observing the party that’s clogged up next to your car.

Don’t attempt to defuse this situation one-on-one — because it’s really not a one-on-one scenario. Call the police, maintain your distance, go back inside the store and wait things out.

Human beings naturally respond to requests for help. It’s something innately driven into just about everyone that when there is someone in desperate need of immediate assistance, we all tend to at the very least look over. Now, unfortunately, this trick has been out in use for some time. But, if you’re unfamiliar, people can and will attempt to use an emergency to draw your attention and draw you to them.

If someone runs up to you and asks you to help them immediately and you’re out in the middle of a parking lot, be on your guard. We would never want to say never to help a stranger in need because that’s something that one is morally drawn to do or not. However, please do consider the position you’re being placed into and the potential pitfall of responding to a request for assistance.

Do any number of things but please, please, please do not go running off into a random part of a parking lot without having backup and assistance.

Previous article: #DIGTHERIG - Austen and his Collection Next article: Two Armed Robbers Wisely Give Up After Deli Worker Draws Gun